The Northern Territory can create more than $2bn in new annual revenue and over 8,000 new jobs by pursuing a target of 10 gigawatts of renewable energy by 2030, new research by Beyond Zero Emissions has found.

Its report shows that backing renewables can turbocharge the NT economy, cut transportation costs by 80%, reduce electricity bills by 30% and it finds that the mining sector would be one of the big winners from an excess of cheap, clean power.

For the first time energy-intensive minerals processing would become viable, opening up employment prospects distributed around the NT, tapping into the NT’s nearly unlimited potential to generate renewable energy.

Switching to solar can provide immediate relief to Territorians in cities as well as remote communities, who pay some of the highest electricity prices in Australia.

The report “Building the 10 Gigawatt Vision” says this is 10 times the Territory’s current electricity generation capacity, and more than 20 times the renewable capacity foreseen by the NT’s current renewable energy target.

“Installing 10 gigawatts of renewables is not a particularly challenging undertaking – at least in terms of scale, cost or land required. 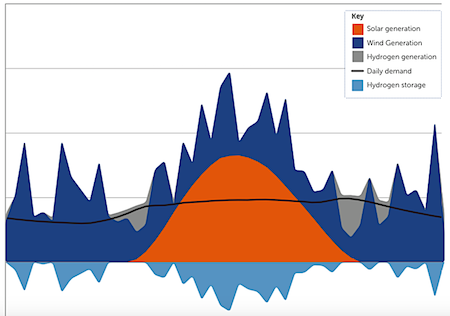 “More than 3.7 gigawatts solar was installed in Australia in 2018 alone and more than four gigawatts is expected in 2019.

“In Australia, there are now several renewable energy project proposals at the gigawatt scale including the Asian Renewable Energy Hub in the Pilbara (15 GW), the Kennedy Energy Park in north Queensland (1.2 GW) and the Walcha Energy Hub in NSW (4 GW).

Ten gigawatts of large-scale solar would cost around $20bn in 2019 prices and possibly much less in 10 years’ time.

“This is a far smaller sum than Australia’s recent gas projects such as the $54bn Ichthys LNG project,” says the report.

“Solar power can also be constructed more quickly than most types of generation, with even large-scale projects often taking only a year.

“Currently renewables in the NT cost 30% to 50% more than elsewhere in Australia, but this premium is likely to disappear as the industry scales its development.

“Until now, the Northern Territory has missed out on the renewables boom taking place elsewhere in Australia.

“But the region has effectively unlimited potential to generate solar power. The NT Government calculated that 450 MW of solar PV requires an area equivalent to just 0.08% of the Victoria River Downs cattle station.

“This means 10 GW would require just 1.8% of the same cattle station – or 157 square kilometers – a minute fraction of the Territory’s surface area,” says the report.

“Even solar power equating to Australia’s entire generation capacity would take up just 0.06% of the Territory (837 sqkm). 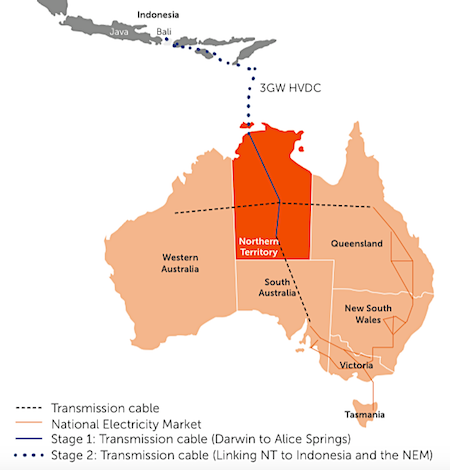 “Just like the Ichthys project, and renewables projects around Australia such as the 15 GW Asian Renewable Energy Hub, the 10 GW vision will be paid for with private investment.

“The government’s role is to create the environment to stimulate this investment. Increasingly renewable energy projects are getting off  the ground once they have signed a power purchase agreement (PPA) with a major customer such as a manufacturer.

“This means policies to support the 10 GW vision and policies to encourage energy intensive projects will be mutually reinforcing,” says the report.

“Both Bureau of Meteorology and Windlab modelling shows there are good wind resources in the southern parts of the Territory.”

Beyond Zero Emissions describes itself as an internationally recognised climate solutions think tank, with a large national network of scientists, engineers, economists and expert advisors.

Its research has produced a complete blueprint for Australia to become a thriving zero emissions economy. It provides detailed costings for a 10 year transition in each sector of Australia’s economy.

By adopting the 10 Gigawatt Vision the NT Government could prevent over 20 billion tonnes of carbon emissions from entering the atmosphere and accelerating global warming, says Nicole Pietsch of the Arid Lands Environment Centre.