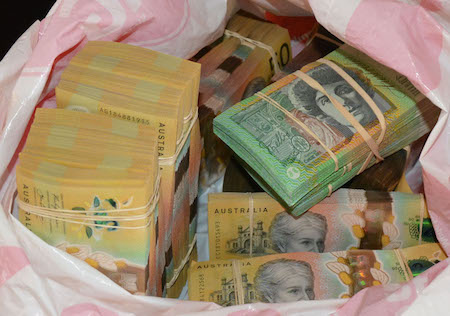 A 39-year-old man allegedly in possession of a large quantity of cash, drugs and a firearm was arrested in Alice Springs on Monday, according to a police media release.

Detectives of the Regional Investigation Division executed a search warrant on a Sadadeen home where a pump-action shotgun, a trafficable amount of cocaine, an amount of cannabis and large quantity of cash were allegedly located.

The man was arrested and transported to the Alice Springs watch house and later charged with offences including supplying drugs, receiving or possessing property from the commissions of an offence, possessing a prohibited firearm and ammunition without permit, and possessing a thing to administer a dangerous drug.

Police say the man has been denied bail and will appear before the Alice Springs Local Court.

Meanwhile today detectives of the Southern Drug Investigation Unit have seized 4.3kgs of cannabis, drug paraphernalia and a quantity of cash..

A 22-year-old man was charged, remanded in custody and is scheduled to appear before the Alice Springs Local Court on Monday.