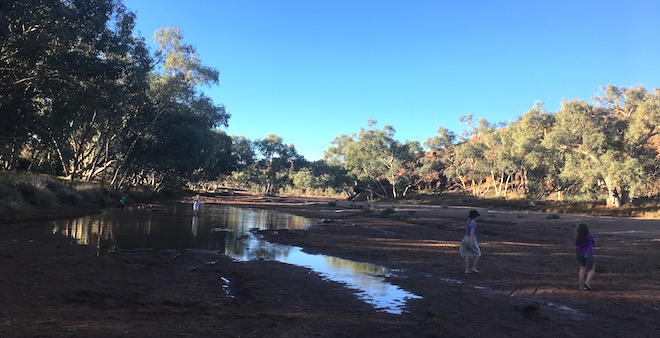 Above: Last signs of a modest flow in the Todd River caused by the rain of 18 May, a rare pleasure for Alice children at the Telegraph Station on Sunday.  Alice’s surface and groundwater systems are all interconnected.

The entire Alice Springs water control district – an area of 8200 square kilometres around the town – should remain off limits to fracking, says the Town Council. This was its position in April 2018 and it will be reiterated in a submission to the NT Government in the current consultation about fracking “no go zones”.

According to the government’s fact sheet about the water district, its surface and groundwater systems are all interconnected: flows in the Todd River recharge the Town Basin, Inner Farm and Outer Farm Basins. South of the Gap, the Todd River and Roe Creek contribute to the recharge of the Amadeus Basin aquifers, which provide Alice Springs with its drinking water.

It was a relatively brief meeting, with the longest matter for debate being the government’s proposed changes to “disciplinary proceedings” for dealing with Code of Conduct breaches.

As readers know, all too well, council has just emerged from a 12-month long Code of Conduct saga, following complaints from Cr Jacinta Price and her parents against Crs Catherine Satour and Jimmy Cocking, as well as one against Cr Eli Melky by a council officer.

Cr Price has returned to council after losing her bid to enter federal politics. Nonetheless her seat was empty at last night’s meeting. Her poor record of attendance at council meetings has been previously raised by the Alice Springs News.

Acceptance of her apology, on account of business commitments, was put to a vote, as is standard, moved Councillor Glen Auricht, seconded Cr Jamie de Brenni.

All raised their hands, except for Cr Banks. She wanted to abstain from this “awkward” vote. That was not possible, said CEO Rex Mooney. So she raised her hand, in “compromise.”

The Code of Conduct issue was raised first in relation to correcting the minutes of the last ordinary meeting, at which Cr Cocking had asked council to support a request for an apology for the Code of Conduct complaints against himself and Cr Satour, which had been found to be variously vexatious, frivolous, even misleading.

This had lapsed for want of a quorum after four councillors had left the chamber. The minutes did not, in Cr Eli Melky’s view, set out correctly the sequence of events that led to this situation.

Mr Mooney said it was an “academic debate”, but if Cr Melky insisted it would need to be put to a vote.

Deputy Mayor Matt Paterson pointed out that in all likelihood four councillors would again need to absent themselves for that vote and again there would be no quorum.

Even had Cr Price been present, it is likely that she too would have had a conflict of interest, so that would not have changed the situation.

“Touché!” conceded Cr Melky. Laughter all round – a sign perhaps that the council is moving on from the tensions this whole situation has caused.

The test will be when Cr Price actually attends a meeting. 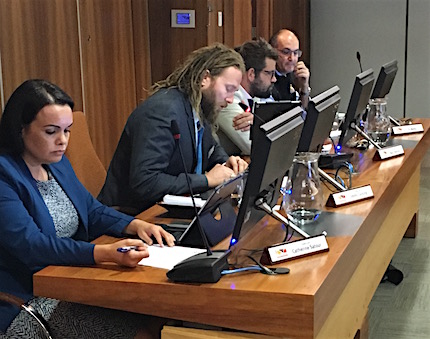 The issue arose again when council discussed proposed changes to the Local Government Act  (LGA) which include changes to disciplinary proceedings – currently dealt with by a committee whose membership is unknown and whose meetings, at least for the recent saga in the Alice council, were held behind closed doors.

The new LGA  proposes that – if the relevant council is unable to resolve a matter –  the complaint be heard by a panel made up of two representatives from Local Government Association of the Northern Territory (LGANT) and one from the Department. If that procedure failed, the complainant could then apply to the NT Civil and Administrative Tribunal.

Under the proposed change to the Act, LGANT would be incorporated under the Corporations Act, instead of being a statutory body under the LGA. This would mean that the government, whom it lobbies on behalf of its members, would not also be responsible for regulating it.

Cr Melky wanted the issues discussed in open council, as a matter of “public interest.”

He was concerned to see the procedures address the standard of evidence behind a complaint, so that it would be more difficult to make vexatious and frivolous claims.

He also wanted to see “some form of accountability”, so that if claims are baseless the complainant is held to account.

He noted the “great pressure” that the complaints system puts people under and referred to a complaint apparently made against Mayor Damien Ryan, according to public comment the Mayor had made.

Cr Melky asked Mr Mooney if there is any matter before him or before a disciplinary committee regarding Mayor Ryan.

“Neither,” replied Mr Mooney. There was no code of conduct complaint on his desk , and he was not aware of one having been referred to the disciplinary committee.

The Mayor said nothing.

Cr Banks agreed with Cr Melky on wanting to see “support” to councillors “falsely accused” in a complaints process, having seen fellow councillors endure “a gruelling 12 months” under the current process.

She also thought the presence on a disciplinary panel of an external party with legal training would be worthwhile.

Cr Satour and Cocking both looked forward to dealing with the subject in a council forum (not open to the public), with Cr Cocking suggesting that council could propose its own changes to the Act, not just respond to what the NT Government is proposing.

Another issue the proposed new Act addresses is campaign donations, but only for the “principal member”, in other words a popularly elected mayor or president.

LGANT, according to Mayor Ryan, feels that the disclosure of donation returns should apply “to everyone”, as it does in the other levels of government.