The orange lines are the Stuart Highway and local roads. The blue line is the Palm Valley to Darwin gas pipeline.

Arafura Resources is ramping up preparations for its planned rare earths mine near Aileron, some 100 km north of Alice Springs.

Brian Fowler, the company’s general manager in the NT, says it still hasn’t got the money to start the $1bn project, but planning for the project is underway “so we are ready when funding is available and a final investment decision is made”.

During the construction phase about 650 rooms will be needed at the project site near Aileron, 300 of which will remain for permanent employees once the mine is up and running.

These will be permanent motel-style rooms for workers a during their rosters.

While it is clear that the mine will be a Bus In Bus Out operation from Alice Springs, it not yet clear how many people will be living here, with their families, and how many will Fly In Fly Out to Alice Springs from intrastate or interstate. 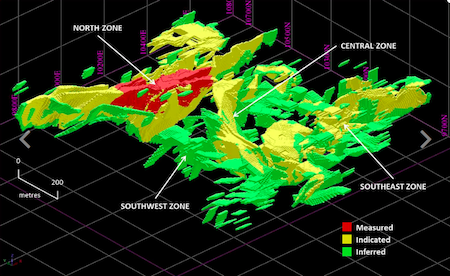 “This depends on how well we go recruiting local people,”, says Mr Fowler: “We will do our best to recruit locals or encourage people to move to Alice Springs but at the end of the day, it’s often a lifestyle or family decision.”

However, the company is considering offering staff who choose to live in The Alice, rosters that are more “family friendly”.

The company is also aware of the potential for local workers to leave their jobs to get better paid positions at the mine: “There is a risk that it could drain staff from the town to the detriment of local business and we want to avoid that as much as possible,” he said.

Mr Fowler says actual tenders for providing accommodation are some time away but the company is getting “indicative costs” from suppliers.

“We will keep to local community informed as the project develops,” he says.

The Arafura website says the company’s focus during 2019 “is to procure the funds necessary to construct and operate the Nolans project in order to take full advantage of an anticipated early-2020s supply shortfall in NdPr oxide”.

NdPr stands for neodymium and praseodymium which are rare earth elements for which a strong demand is expected to come from China in the early 2020s. It is used in mobile phones, hard disc drives and the magnets in electric vehicles motors.