Town Council out of step with counterparts on assets register 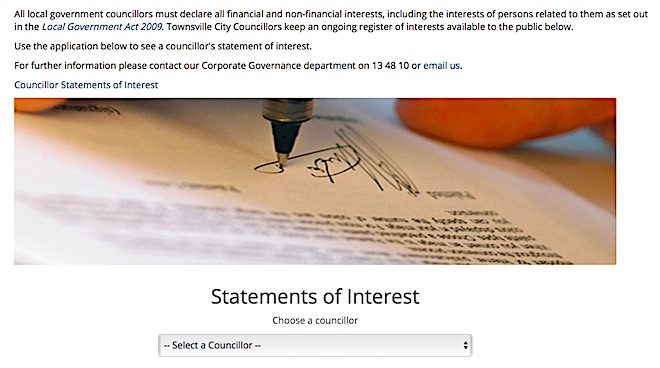 Above: Screen shot from the website of Townsville City Council. Statements of interest that councillors disclose include sources of income of more than $500 per year, shareholdings, corporate memberships, self-managed superannuation, interests in land, liabilities, gifts and receipt of hospitality. That’s transparency.

The Alice Springs Town Council has a register listing elected members’ assets – but it is open only to the elected members and the CEO, not the public.

As previously reported, Federal Parliamentarians are obliged to disclose what they own and what they get paid and anyone can take a look at this. In at least some of the states, this is also the case.

This is how the Municipal Association of Victoria describes the position in that state, taken from the “Know Your Council” website under the Guide to Councils.

“All Councillors and senior staff must lodge interest returns in which they disclose specified interests.

“Members of special committees are also required to lodge interest returns unless the council specifically exempts them.

“All returns are kept in the register of interests and any person may make a written request to inspect the returns of a councillor, officer or committee member.

“Request forms are available from the Council.”

In Queensland, whose Local Government Association we asked whether registers are a legal requirement in that state and whether they are accessible to the public, replied: “Yes to both your questions. The registers are published on each council’s website.” 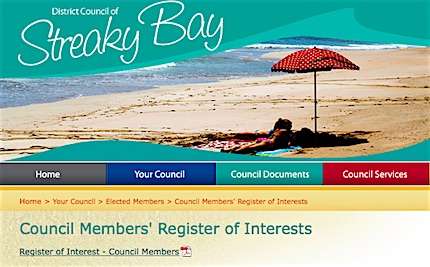 A council I am familiar with in South Australia, the Streaky Bay District Council, has a range of disclosures on their website, including all sources of income for elected members and any gifts received worth $750 or more. There is a separate register for staff and elected members for gifts of any value, including disclosure of who they are from.

I’m still waiting for responses from NSW and WA.

It is only matter of political will that prevents the Alice Springs Town Council from taking this step towards transparency.

In the past it looked like Mayor Damien Ryan agreed.

In a story on October 1, 2013, ABC reporter Emma Sleath quoted Mayor Ryan on a mooted register, following the controversial resignation of Cr Geoff Booth: ”I think it’s a very good move for council, elected members and senior directors and managers to have a public record of what they’re involved in,” said Mayor Ryan.

“It would include where you earn your income, who you’re involved with, what clubs you’re a member of, also operations that you may hold shares in.”

The register was introduced but it has never been open to the public.