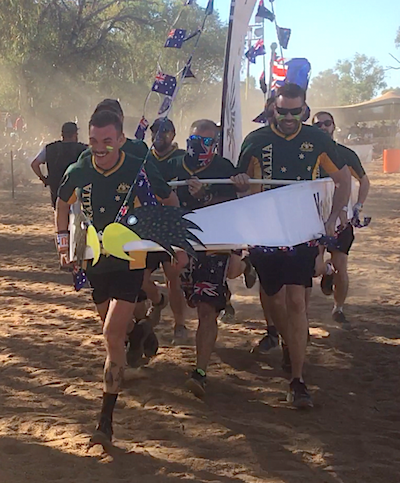 Mayor Damien Ryan said during an interview with me on November 26 last year: “That’s why I left Rotary. It’s because there are Rotarians who don’t honour the code of Rotary in their every-day life. You are one of them. You are not honest.”

He was referring to the Rotary Club of Alice Springs, of which I am a member. It is one of the town’s oldest and most active service clubs, including collaborating in running the Henley on Todd (at right) and Bangtail Muster, and it conducts the Melbourne Cup Sweep which raises substantial amounts for grants awarded to local students.

I reject his baseless accusation, and I have also offered the club a right of reply.

The outburst occurred in the presence of council’s media and communications officer, the only other person present at the meeting and frequently a contact for the Alice Springs News Online in its reporting about the town council.

I subsequently demanded from Mayor Ryan an unreserved retraction of his remarks, to be emailed to the media officer and to me.

This would have been the end of the matter. I kept the invitation open until early last week –  three months – but Mayor Ryan has declined to provide that retraction.

On December 19 he emailed: “Mr Chlanda, In the spirit of the Christmas season, I apologise for taking part in an interview with you on Nov 26th, and if you took offence to anything I said, I apologise unreservedly.
Merry Christmas, Damien Ryan.” 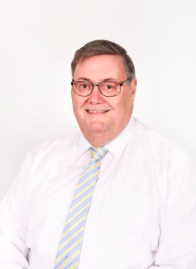 I emailed council CEO Rex Mooney, copy to the media officer and Mayor Ryan (pictured at left in the council website), rejecting his response on the following grounds: “I am not seeking an apology from him for taking part in an interview with me. That was doing his job.

“Neither does he accept his conduct was entirely out of line – he apologises just in case I had taken offence.”

The interview dealt in part with a register of assets and incomes of elected town council members.

During the audio recorded interview Mayor Ryan angrily claimed that the News had reported in January last year that his earnings at that time from non-council sources were $2000 greater than his Mayor’s pay of $100,000 a year.

Mayor Ryan’s assertion is entirely false. Further, if he had had any grounds for complaint, he could have raised the matter at the time. Ten months had gone by before he raised it so aggressively.

The January 2018 report clearly referred to a 2014 report (and included a link to it). That previous report was  headed “Ryan earning more from govt. jobs than for being Mayor”.

Our January 2018 report – lightheartedly – showed a photo of a bicycle (pictured) such as the one former Prime Minister Tony Abbott had declared among his assets.

I was raising a matter in the public interest: While elected people around the country are widely required to declare their assets, and those declarations are open to the public, on Mayor Ryan’s 10-year watch that kind of transparency has not been introduced to the Alice Springs Town Council (see our separate report on this issue).

Mayor Ryan’s additional earnings in 2014 – mostly from serving on NT Government boards – was another example of facts I consider the public has a right to be informed about. 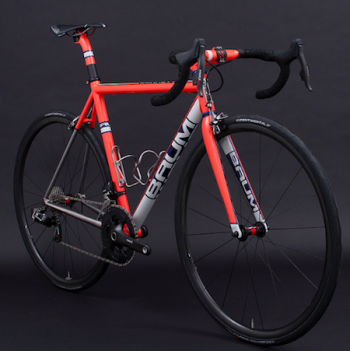 In relation to his conduct in the November interview, I consider Mayor Ryan is in breach of the council’s Code of Conduct. It states in part that an elected member has to “refrain from any form of conduct, in the performance of their public duties, which may cause any reasonable person unwarranted offence or embarrassment”.

There are two options for the investigation of Code of Conduct complaints – it can be by the council’s elected members, or by a panel set up under the Local Government Act.

I told CEO Rex Mooney that my preferred option was for the councillors to deal with my complaint but on the not negotiable condition that the process would be entirely open to the public, not behind closed doors.

I was taking my lead from the condition laid down in the Local Government Act, when a complaint is heard by a government appointed panel, that “proceedings of the disciplinary committee are to be held in a place open to the public unless the disciplinary committee considers it desirable, in the public interest, to hold the proceedings in private”.

As the News has reported extensively, a number of Code of Conduct investigations under the Act proceeded last year behind closed doors, in flagrant breach of the Act, as the public interest of the secrecy had not been demonstrated.

These investigations severely impacted the smooth and efficient running of the council, exacerbated its split into factions, created tensions and distrust between the members and no-one knew who was blaming whom for what and who was sitting in judgment. Apparently some of these processes are still continuing.

Meanwhile, in relation to my issue with Mayor Ryan, the council solicitor, Chris Turner, was busy looking for ways of cloaking in secrecy any action that I was considering: “The meeting itself where the complaint is heard and determined should be heard in confidential session,” he wrote in an email to me.

“It is suggested that Local Government (Administration) Regulations [he states them] are sufficient to exclude the public.”

This is what Mr Turner had come up with to justify “excluding” the public:–

• Something that may “prejudice the interests of the council or some other person”: Doubtlessly it would be in the interest of Mayor Ryan for his behaviour to be kept under wraps.

• That “information provided to the council on conditions that it be kept confidential”: There is nothing I would have put before the council that the public could not know about.

Both Code of Conduct processes, the government’s and council’s, are flawed to the point of absurdity and the way they are practiced is a denial of transparency that the public deserves.

Mayor Ryan is invited to respond.