Enjoying The Centre at a frantic pace 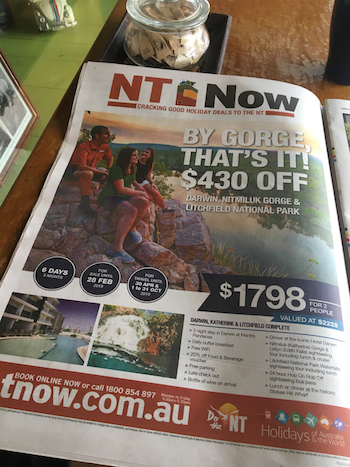 The NT Government will not disclose details of a deal with the Murdoch Daily Telegraph for the publication of a series of full page advertisements promoting tourism.

Meanwhile Tourism NT, in collaboration with the South Australian Tourism Commission, has developed a “suggested itinerary” for the Explorers Way to be presented at a European roadshow that would have tourists spend no more a few hours each in multiple places between Adelaide and Darwin.

The Alice Springs News Online asked the Department of Tourism, Sport and Culture to provide all images to be used in the newspaper campaign, so we could judge whether Alice Springs is getting a fair deal, as well as the total cost of the campaign.

A spokeswoman for the Department of Tourism, Sport and Culture says these details are “commercial in confidence”.

The Alice Springs News Online started enquiries when a reader sent this photo (above) with the comment:
“Not a word about Alice Springs.”

The spokeswoman says Tourism NT has entered into a cooperative marketing agreement with Holidays of Australia entitled NT Now, running from October 1, 2018 to September 30, 2019.

We asked Tourism Central Australia chairwoman Dale McIver for a comment and she said the campaign is a “whole of NT promotion.

“Check out their website and social media pages. Central Australia has been well represented with this campaign.”

Neither the website nor social media – so far as the News could find – give details about the total exposure of Alice Springs and surrounds, nor financial details.

Ms McIver, if she has them, has not provided these details.

Meanwhile Acting Minister for Tourism, Sport and Culture, Eva Lawler, has announced in a media release that 10 “local tourism operators will be showcasing what the Territory has to offer to holidaymakers from the United Kingdom and Europe as part of the inaugural Explorers Way New Experiences Roadshow.

“The roadshow will roll through London, Manchester, Zurich and Munich from February 25 to March 2 promoting the iconic Explorers Ways touring route.”

The way the “suggested itinerary” proposes that you should start rolling by making “your way north from Adelaide through the subterranean mining town of Coober Pedy”. For this a generous four days is recommended.

Then it’s all out to “the world’s most famous monolith, Uluru. Catch a sunset over the mighty red rock and take a walk through Kata Tjuta”. This would need to be conducted at a brisk jog because because Day 5 also includes the 734 kms from Coober Pedy. 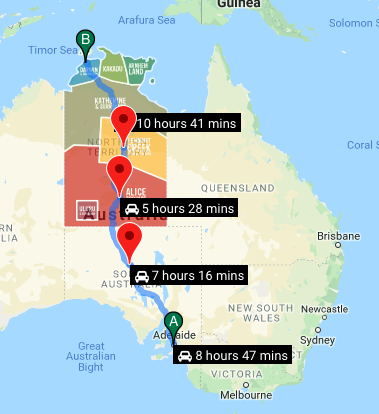 “Hit the highway the next day (Day 6, 300 kms) for the sandstone wonder Kings Canyon and enjoy spectacular views across the desert.”

They would be little more than a glimpse because Day 7 has the 474 kms drive to Alice Springs in store where you “stay a while … art capital of Australia, before losing yourself in the chasms and gorges of the West MacDonnell Ranges” (Day 8, 130 kms – actually it’s 260 kms return).

You’d have to find yourself again very quickly because on Day 9 it’s off from Alice up to Tennant Creek where you can “brush up on gold rush history, see the Karlu Karlu/Devils Marbles, and learn about local Aboriginal cultures” – quite a program for what’s left after driving 510 kms.

By now you should be used to travel at a frenzied pace so the next five days – 400 kms, 167 kms, 106 kms – almost a day off – 265 kms for Day 13, taking in Katherine and Litchfield National Park where you “camp out under starry skies and sink into the popular waterholes … before pushing north one last time to the multicultural metropolis of Darwin for a swim in the wave pool and a trip to the markets” (Day 14, 130 kms).

After all this, any Europeans lured to Oz by the 10 intrepid operators will certainly need a holiday which they will probably take in Bali.