A member of his home community says Harold Morton (at left) is back at Ampilatwatja, has lost a bit of weight but is generally well, and guarding his privacy.

He had walked out of the small bush town, population 418, north-east of Alice Springs, on February 1 with nothing but the clothes he was wearing.
About half of the 17 days he was considered missing the temperatures were in the mid-fourties, says the community member. 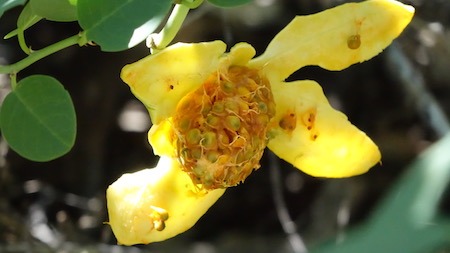 When the police air and ground search was called off after five days members of Mr Morton’s family continued to look for his tracks.

Although a strong wind had blown his footprints away the searchers located places with remnants of bush foods, including bush passionfruit (at right), where Mr Morton had eaten, and places where he had slept.

They found places where he had dug for echidnas (below left), using sticks. Mr Morton had no other tools.

Diggings for water were also found where bird tracks would have led Mr Morton to soakages.

It appears he also stopped at bores and cattle watering points created by pastoralists. As reported, he was found near Trew Bore, about 66 kilometres north-east of Ampilatwatja, around midday on Sunday. 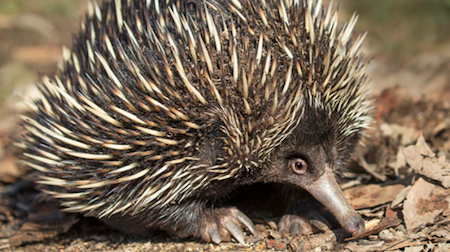 That is honey produced by small bees, about the size of a fly, and stored in a hive inside a tree.

The only external sign is a small hole which can be found by following the flight of the bees.

Before the “white man” that honey and a little black berry were rare sweet delicacies, says the community member.

After settlement,  the ready supply of fat and refined sugar have caused the tragic prevalence of diabetes among Aboriginal people.

The community member says Mr Morton clearly has an acute sense of direction as the country is flat and almost devoid of obvious landmarks.

NOTE: We have replaced the bush passionfruit photo.