Visitor from afar to Alex's backyard 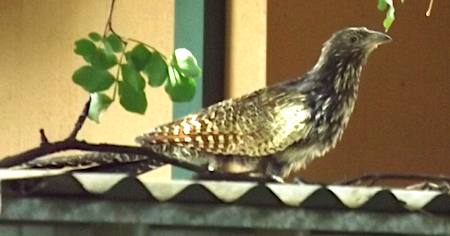 I have just been privileged with a visit in my back yard of a rare traveller to the Centre – a Pheasant Coucal.

Even better, I managed to get a few photos of this bird. Seen in the Old Eastside of Alice Springs, it is way outside of its normal tropical and coastal distribution.

According to Wikipedia: “The pheasant coucal (Centropus phasianinus) is a species of cuckoo in the family Cuculidae.

“It is found in Australia, Timor and New Guinea.

“It has adapted well to canefields in northern Australia. The pheasant coucal is unusual among Australian cuckoos in that it incubates and raises its own young instead of laying its eggs in the nest of another species.”

This is probably the same bird I glimpsed through the canopy of a mulberry tree in front of my flat last November but didn’t have a clear view of it. My first thought was that it is a channel-billed cuckoo helping itself to the fruit but it didn’t look quite right.

Not long afterwards my neighbour across the street reported seeing a pheasant coucal in his yard; since then, however, I’ve not seen any sign of it until today. 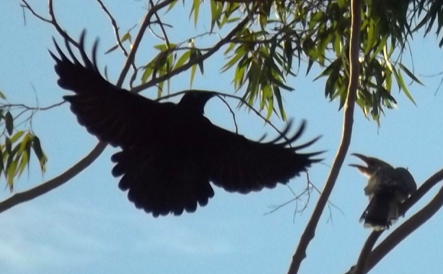 Pheasant coucals are similar in size to channel-billed cuckoos (regular summer migrants to Alice Springs) but prefer to stay close to the ground and don’t make a raucous cry in the tree-tops as the cuckoos are fond of doing.

The coucals’ spotted brown plumage also makes them harder to distinguish in the dappled shade in tree and shrub canopies.

I had a lucky break to find this bird in plain view on the back lawn, apparently attracted to ripe berries that have dropped off a nearby curry tree.

Although it was wary, I kept a sufficient distance not to spook it and so was able to get a few photos of the bird as it gradually made its way up into a nearby tree canopy via a shed roof and tree stump.

One of those special moments that makes living here so delightful.