German woman, 62, may be lost in the bush

As police “hold concerns for the welfare” of 62-year-old German tourist Monika Billen (at left), whose “last physical sighting” was was nine days ago, questions are being raised about any safety initiatives introduced since fellow Germans Wilfried and Gisela Thor, aged 75 and 73, perished near Trephina Gorge nearly two years ago.

Acting Superintendent Pauline Vicary says police was told yesterday morning that Ms Billen had failed to return to her accommodation at the Desert Palms Resort on Barrett Drive.

“At this time, the last physical sighting of Ms Billen was via CCTV which showed her leaving the resort at 10:30am on January 1. She was supposed to check out of the resort on January 5,” Acting Superintendent Vicary says in a media release.

“We understand Ms Billen may have had some interest in walking the Larapinta Trail or local bush trails.

“Police have been and will continue to conduct enquiries as to Ms Billen’s possible movements since leaving the resort, and have deployed our Remote Piloted Aircraft to popular walking tracks around Alice Springs.”

“She is of Caucasian appearance, slim build, with short grey hair and was last seen wearing a red chequered long sleeve top, denim knee-length shorts and a bright red backpack. 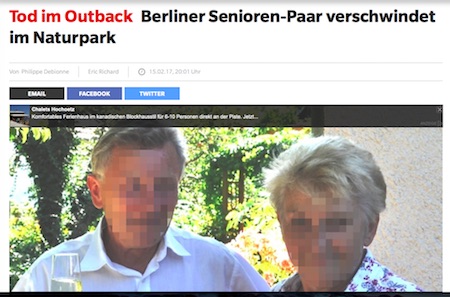 The tragic death of the Thors (at right) sparked a sparked a urgent debate about what public and private organisations could do to protect visitors, especially during the hot time of the year.

One suggestion was an aviation-style Search and Rescue (SAR) system where tourists nominate their destination and their intended time of return or arrival. Efforts to find them would start 10 minutes after the “SAR Time” expires and has not been cancelled.

We asked Tourism Central Australia (TCA) and the police today if they had acted on suggestions made after the death of Mr and Mrs Thor, and if so which ones and how, including the introduction of SAR facilities. We will publish the response from TCA, if and when we receive one.

Police Media Director Scott Howard provided the following response: “Are you suggesting that it was the responsibility of police to prevent the deaths of Mr and Mrs Thor?

“If so, I suggest reviewing the formal finding and recommendations of the NT Coroner following his inquest into the matter handed down on November 26, 2018.

“The only recommendation the coroner made was for the Department of Tourism and Culture, as follows: ‘I recommend that the Department of Tourism and Culture do all such things as may be necessary to advise visitors who may visit its parks in areas without telecommunication reception of the existence of GPS applications and the use to which they might be put when visiting those areas.”

Superintendent Pauline Vicary (pictured) told a media conference an hour ago that Ms Billen was travelling on her own.  When she left the hotel on January 1 she turned south on Barritt Drive, as CCTV footage shows.

“She has not been seen since,” said Supt Vicary.

Ms Gillen had been in Alice Springs for a week and was due to check out of the hotel on January 5. She was due to catch a plane to Darwin on that day but did not do so.

Documentation in her accommodation showed that she was interested in walking surrounding bush trails and tracks, as well as the Larapinta Trail.

Mounted police and police on motorbikes have joined the search.

Five cars were seen on the TV footage when she started her walk down Barritt Drive, including two taxis. Supt Vicary urged them to contact police.

The search at the moment is in the area near The Gap and the Todd River bed, using drones, while rangers are searching parks, including the Larapinta Trail.

Supt Vicary said there were no suspicions of foul play “at this stage but we will pursue all lines of enquiries”.

Asked why it had taken four days – from January 5 till yesterday – for the alarm being raised she said: “I don’t know what the delay was.” It had been the staff of the accommodation who raised the alarm.

Asked whether Aboriginal trackers had been involved in the search, Supt Vicary said: “Not at this stage but down the track if we need to have a look at that we will.”

Asked about the high temperatures Supt Vicary said: “We are gravely concerned.”