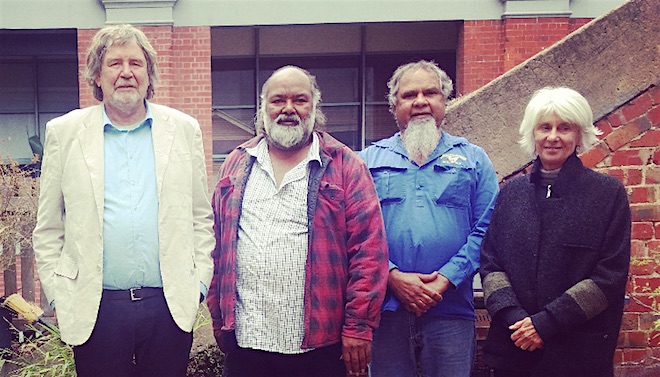 Above: Co-authors Gerard Waterford and Frances Coughlan with sons of the late Frank Byrne, Trevor Byrne (second from left) and Frank Kenny, in Melbourne today ahead of the award ceremony. Photo courtesy Ptilotus Press.

Living in Hope, a memoir by Stolen Generations survivor, the late Frank Byrne, with Frances Coughlan and Gerard Waterford, has won the 2018 Most Underrated Book Award, offered by the Small Press Network.

The announcement was made tonight as the SPN Independent Publishing Conference opened in Melbourne.The award was accepted on his father’s behalf by Trevor Byrne.

“It is very important for people to learn what happened back in them days, the way the government system was authorised to take kids away from their parents. People need to learn from that history. The MUBA win gets our dad’s story out there and people need to understand his story doesn’t just re ect what happened to Aboriginal people here, but what has happened to Indigenous Peoples across the world,” said Mr Byrne.


The MUBA is in its seventh year. Frank Byrne is the first Indigenous Australian author to win the award and Living in Hope is the first memoir to win.

The win follows the award of ‘Best Non-Fiction’ title for Living in Hope at the 2018 Territory Read Award .

Frank Byrne was born in 1937 at Christmas Creek (Fitzroy Crossing) to a Gooniyandi woman and an Irish stockman. In 1942, he was taken from his mother and sent to Moola Bulla native station; two years later he was moved on to Beagle Bay mission, before returning to Christmas Creek in 1951 to become a stockman. In 2000, Frank began formal enquiries into where his mother’s remains were laid to rest and in 2015 worked with Gerard Waterford and Frances Coughlan on Living in Hope, with the early chapters drafted during a trip through the Kimberley region. Frank was diagnosed with cancer shortly after returning from the Kimberley region and, as his book neared completion, Frank’s life was also drawing to an end. He died on 20 October 2017. 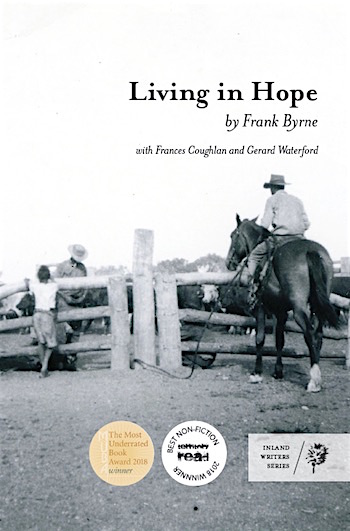 In writing the book, Frank hoped to draw attention to the history of the Stolen Generations and the devastating intergenerational impacts of institiutional care. It forms the first three chapters of his life story, which will be published in full in 2019 by Ptilotus Press and distributed by NewSouth Books. Ptilotus Press is a not-for- profit, collectively-managed local publisher, advocating for Central Australian writing.

MUBA Judges Sarah L’Estrange, Megan O’Brien and Toni Jordan said that Living in Hope is an “important story of survival and hope” and that they “hope the award provides some measure of comfort to his family”.

Co-authors Frances Coughlan and Gerard Waterford said: “Frank wrote this story to have an impact on what is happening in the current world. He wanted his own kids, his grandkids and the families around him to actually know what happened to the Stolen Generations. He wanted it recorded for history. He was absolutely outraged by John Howard and others making claims that children were being rescued not stolen. That was painful for him to hear. That denial of truth was a reason why he was driven to have this story out. His story and stories like this are really important.”

Mr Waterford added that he hoped the attention from the MUBA would “invite people to talk about it and to heal each other” and that these conversations “will be one of the things Frank is most proud of”.

Both Ms Coughlan and Mr Watreford are social workers employed by Central Australian Aboriginal Congress as ‘Bringing Them Home’ counsellors.  Ms Coughlan’s  practice is influenced by narrative and family therapies which place people as the experts in their own lives, and draws on the resilience, humor, compassion and creativity that people bring to survive through hard times.

Mr Waterford is a co-founder of the Central Australian Narrative Therapy Group  and in his role as counsellor, he has assisted many survivors of the Stolen Generations in writing memoirs, including Alex Kruger’s Alone on the Soaks (2007 IAD Press).

NT Writers’ Centre Program Manager in Alice Springs, Fiona Dorrell, said the MUBA18 win affirmed the value of community-driven literature: “Seeing Living In Hope win a national award is a huge affirmation of the unique ways of working embodied in this book. Its legacy is stewarded by so many members of the local community and ultimately by the immediate and extended family for whom the intricacies of this story continue to be held and lived. To receive national acclaim and attention impacts so many people and reminds us of the importance of community-driven literature.”

‘A memoir of finding things, not just losing them’: TIM ROWSE‘s review of Living in Hope.