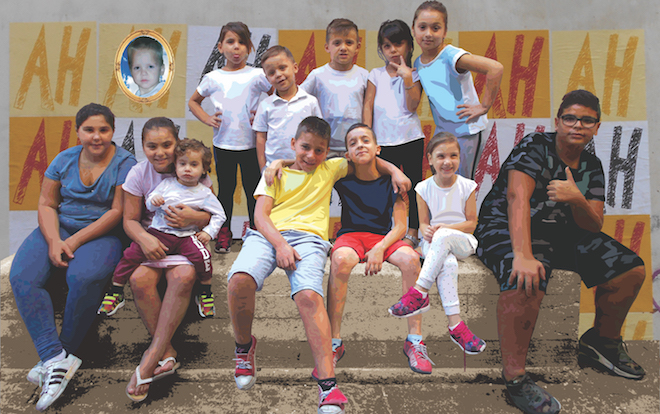 Above: The Laughing Wall with the kids from Piazzetta Appalto.

In Palermo, capital of Sicily, street art is welcomed: no police or by-laws to worry about, no irate proprietors, or council rangers scrubbing walls.

On the contrary. When long-time Northern Territory artist Chips Mackinolty made his first paste-ups in the Vucciria area, he was soon approached by business owners who wanted some for their premises – a panel-beater, a fish-monger, a barber, a trattoria.

As Alice’s inaugural festival of street art gets underway, this veteran practitioner is showing a photographic record of some of this work at Watch This Space, along with a few examples of paste-ups around town made since Mackinolty moved here a year ago. In a few weeks’ time the exhibition will open in Palermo.

The show includes a video of a paste-up project done with children of  Vucciria. In it one of the adults accompanying the children explains to them that what Mackinolty is doing is making their streets “more beautiful”. 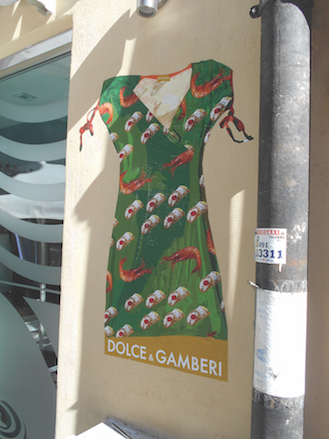 The children enthusiastically take up the cut-outs Mackinolty produced – vernacular images from this 1100-year-old market area, loaves, fish and sea gulls – and, with some guidance from “Mr Chippie” on gluing technique, enliven a blank wall with an assembly of the paste-ups.

In other work local youth got involved in a different way. After Mackinolty photographed one group of kids around the corner from where he was living (he returns to Palermo regularly) and made them the focus of a paste-up, another group demanded to also be represented. In fact, not only the kids but their parents, including the parents of a child who had died, and the parents of children who had missed out on the photo session. Mackinolty obliged.

In these two works he goes back to origins, to The Laughing Wall, a notable paste-up – repeats of “HAHA” – from 1972 by Aleks Danko and the late Colin Little. They made it for the busy street frontage of the Tin Sheds, an experimental art workshop at Sydney University, home of the poster collective, Earthworks, of which Mackinolty was a prominent member. The collective was renowned for its sharp political messaging that was also funny or cheeky or both.

In Palermo, Mackinolty’s tribute to The Laughing Wall was appropriately translated into the Italian way of signifying laughter, “AHAH”. The combination of the smiling, sometimes cheeky kids and the AHAHs works a treat – if only we could see such upbeat representations of local youth on our streets.

In fact, we soon will: a Mackinolty work, featuring young people from Alice, is set to adorn a blank wall of the new Congress clinic at the Northside shops. 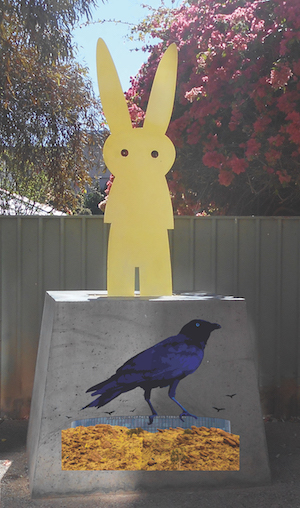 In other images from Palermo, the artist laughs with, rather than at, popular culture, for instance the hyped fashion designers Dolce & Gabbana, punning on their name with his printed dress, showing sweet pastries (dolce) and prawns (gamberi) – the perfect dress  for a market area.

He also celebrates community cultural life with L’orchestra incognita (The unknown orchestra),  a wonderful assembly of street musicians coming together only in his paste up …  and our dreams.

I feel that I learnt something about Vucciria through his eyes. His work in Alice is as yet more tentative – birds, chooks, a dingo on private fences in the suburbs. The Crow and Rabbit is the most pointed, having a gentle dig at the off-the-shelf yellow rabbit masquerading as public art in the laneway outside the Supreme Court. (This work exists only as a photograph, not in the street, but it would offer a significant improvement to the vacuous bunny.)

I’ll look forward to seeing work in Alice from this artist in the vein of the Palermo work, in the streets, engaging with our human cultures, the more pointedly and humorously the better.  What will he propose to us as images of ourselves?