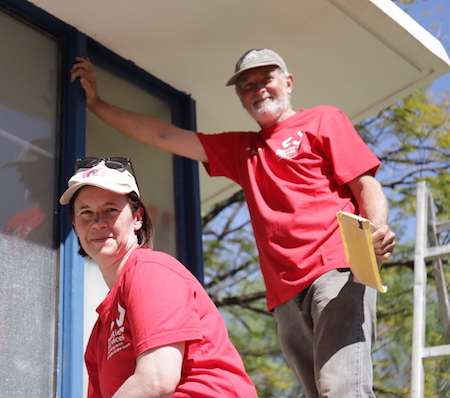 “Men in remote Australia live seven years less. That is primarily to do with mental health, substance abuse, and social isolation.

“Government funding for mental health support services is 10 times greater in metropolitan areas and yet somebody in remote Australia is more than twice as likely to commit suicide.”

Right: Sanding down Flynn Church ahead of a paint job are volunteers Rachel Morgan from Victoria and Alice Springs local Keith Castle.

This is the current focus for Frontier Services, founded by the legendary Rev Dr John Flynn 106 years ago.

Says the bush charity’s executive director, Jannine Jackson: “The ability to get help when bush people need it is a significant challenge.

“I can give you examples of people who had to wait nine months to see a mental health specialist. In the city you can walk a block and see somebody.”

Mobile phone and satellite internet services in the bush are still catching up in “big chunks that are still not connected. Often people don’t see another person for weeks on end”.

True to form, some 30 members of the Uniting Church charity, locals and from around Australia, are celebrating the birthday by working.

They are giving a facelift to the first hospital in Alice Springs, Adelaide House, and Flynn Church next-door in The Mall, built by Rev Flynn in 1927 and 1954, respectively.

Throw in the School of the Air, the Flying Doctor Service and the Old Timers, now transferred to another division of the church, and Flynn of the Inland’s “mantle of safety” is still spread wide. 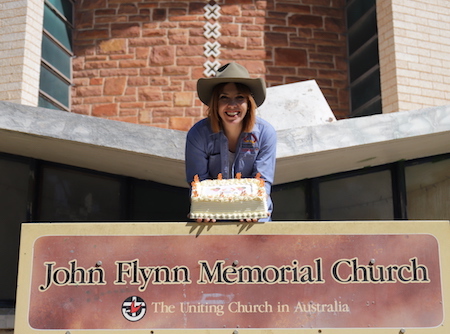 Ms Jackson (at left) says bush chaplains are “doing the same job they’ve been doing for a 100 years.” In Alice Springs that’s in the person of Benjamin Quilliam.

“They are making sure there is a friendly face people can have that conversation with,” she says.

“They are often the first responders in emergencies, whether that’s a personal crisis, or a fire or a flood.

“The chaplain is the person who can hook them up with social support and other structures.

“People in the bush are very self-reliant. They have to be. Often they don’t put up their hand for help until they really, really need it.”

Rev Quilliam spends a lot of time in his 4WD but he also has a small “hub” in Adelaide House, ministering to people in need of this town’s immensely diverse population.

“It doesn’t really matter where they come from or what the emergency is. He is giving real, non-judgmental support,” says Ms Jackson.

The volunteers are working under the guidance of heritage architects advising “us even down to the shade of paint we are allowed to use”.

Both buildings will get a lick of paint inside and out. Volunteers include electricians, carpenters and joiners, painters, gardeners “and others ready to lend a hand,” says Ms Jackson.

It is estimated the materials alone will cost about $80,000 but a significant heritage grant was received from the Northern Territory Government.