Home Issue 5 Is Rock getting solar power at price of fossil?
Issue 5Volume 25

Is Rock getting solar power at price of fossil? 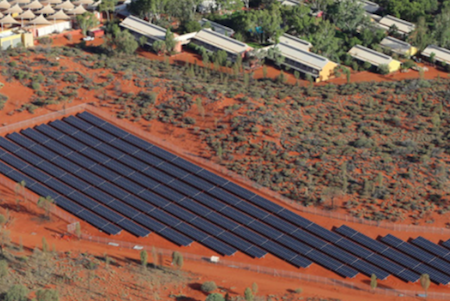 The Ayers Rock Resort is getting 15% of its electricity from the sun, the equivalent consumption of about 150 Australian households.

That’s no big deal until this is taken into account: This solar power comes at the same price as that generated from fossil fuel.

But this is where it gets tricky: What is the cost of power to the resort?

Is the NT Government providing it at the subsidised rates it applies throughout the NT?

The resort company, Voyages Indigenous Tourism Australia, has not responded to our requests for information.

Who owns the power station at the resort? we asked Jacana.

It replied: “This is a privately owned asset. Jacana Energy is not aware of the ownership arrangements for the asset.”

In fact the Yulara power station is owned by the NT Government’s Territory Generation (TG), according to its CEO, Tim Duignan.

He says TG sells the electricity to Jacana at cost recovery basis: The natural gas is provided by PWC, delivered to TG at the Brewer Estate in Alice Springs where it is compressed and taken to Yulara by road train, doing the almost 1000 km round-trip every day.

Mr Duignan says he doesn’t know what Jacana charges the resort (and a few other minor users).

Are the arrangements still in place, similar to when the NT Government’s torturous process got under way of selling the resort?

“Normalisation” was the buzzword more than 20 years ago when Chief Minister Shane Stone wanted Yulara to be like any other town: The Ayers Rock Resort Company, up for sale by the government, owned the freehold title to the 100-odd square kilometres of the town area, as well as all the major tourist accommodation facilities and several other businesses.

“However, the NT Government provided – clearly at a significant loss, although details are not available from the government – all utilities including power, water and sewerage, as well as a school, police and health services,” we reported on October 15, 1997.

So what does it mean when the Australian Renewable Energy Agency (ARENA) says today: “Voyages is funding the entirety of its lease obligations to Epuron [the provider of the solar system there] through savings on existing energy expenditure, demonstrating that renewable energy can be commercially competitive with fossil fuels in remote, off-grid locations.”

Are these savings calculated at the NT Government subsidised tariff? Or are they savings based on the real costs?

This is how the solar installation, whose cost ARENA estimates at $6.89m, works at The Rock, in a scheme overseen by lead consultants CAT Projects, Aboriginal owned and Alice Springs based:–

Epuron, through subsidiary Yulara Solar, owns and maintains the system and leases it to Voyages for about 20 years, with Voyages having direct access to the energy it generates.

Voyages says Yulara Solar is also largely responsible for arranging the finance to fund the project, most of which is provided by the Clean Energy Finance Corporation, an agency of the Commonwealth government.

Voyages and Yulara Solar have each contributed additional money to fund development and construction of the plant.

ARENA is providing $450,000 to Voyages, to analyse and share the learning and expertise gained from the project with the energy industry. This covers a substantial portion of the development costs for Tjintu, the name of the project, the word for sun in Pitjantjatjara. 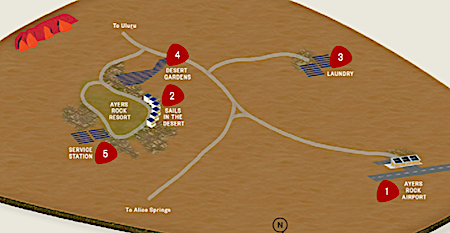 The solar panels have an efficiency of about 20% which means that 20% of the available solar energy that falls on the panel is converted into electricity.

In order to avoid large-scale land clearing for the solar arrays, three of the five are on rooftops.

The arrays for the Ayers Rock Airport (#1 on the image), on the roof of its terminal building, have antireflective coatings and black frames to minimise glare that could endanger aircraft.

The Sails in the Desert (#2) solar panels are installed on the roof of the western wing of Voyages’ flagship hotel. Its roof previously was covered in solar hot water panels, which were part of an air conditioning system that converted heat into cold air. They were installed in the 1980s and decommissioned prior to 2000.

The Desert Gardens (#4) array is the largest, situated between the Lasseter Highway and the Resort Town Square, on the other side of a sand dune next to Desert Gardens Hotel. It produces about 58% of the total system and covers about two hectares, near the resort’s central plant room.

The Service Station (#5) array on the eastern side of the Ring Road takes up about one-third of a hectare. It is the only array likely to generate excess power, which can be fed back into the town’s electricity grid, resulting in a credit to Voyages.

PHOTO at top: One of the five arrays at the Ayers Rock Resort. Three of them are on rooftops, to avoid land clearing.