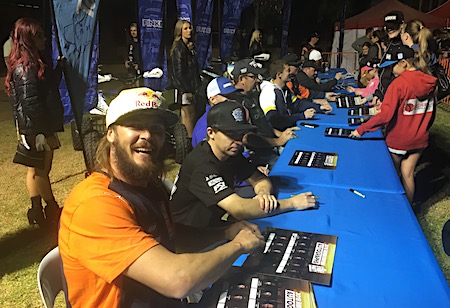 The Finke started pumping last night when thousands of people were in The Mall and on the council lawns, rubbing shoulders with the men and women who will contest the nation’s hardest and one of the fastest offroad races.

The number of bike entries stands at 616 and 132 drivers will compete on four wheels.

Toby Price, from NSW, the 2016 bike winner and second place getter in a Trophy Truck, will try to make it two firsts in an indefatigable effort to compete in four races in two days. He missed last year’s Finke because of injury.

Price (pictured) will be up against Shannon and Ian Rentsch in a Jimco Buggy who won last year – and in 2014 and 2015. 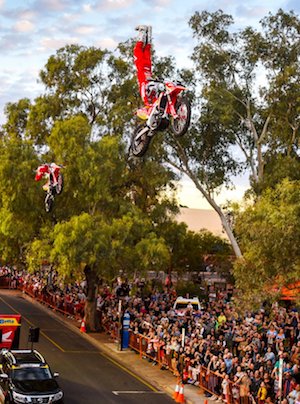 Sunday it’s down to Finke, and back to Alice on Monday.

Some 12,000 spectators usually enjoy the race, at the start / finish line in Alice Springs, or along the 229 km of desert track, celebrating an event almost entirely run by volunteers.

PHOTOS: Toby Price giving hundreds of autographs last night when bike stunts were part of the excitement for the crowd.