To save a dying language 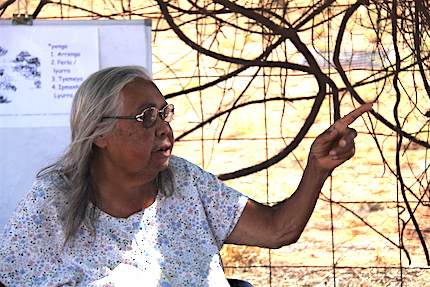 There are less than 20 fluent speakers of Southern Arrernte, or Pertame, the language that belongs to the country south of Alice Springs, around the Finke and Hugh Rivers.

That puts it into the category of “severely endangered”. But its speakers are taking action, holding a Pertame School this coming weekend at Boomerang Bore Outstation, 120km South of Alice Springs.

Pertame School is the dream of Pertame elder and fluent speaker, Christobel Swan (above left): “I want to teach my children, grandchildren and great grandchildren our language and show our country to them so they can think and talk in Pertame. Our old people, poor things, have all passed away now. There are only a few of us left to teach our kid how our old people used to live”.

Pertame owes its endangerment to a harsh colonial history, dispossession from country and monolingual language policies.

Christobel Swan remembers how her language was treated in her youth: “When I was about ten, we used to come in from the station, and we’d be walking along the street, and people would say: “Don’t talk that language”. Even at school they used to give us a hiding in the playground. And I often used to think why should I speak English? That’s not my language!”

Language is the central way through which we come to learn about the self and society and the core element of our individual and collective identities. First-language learning nurtures strong individual and group identities, strengthens families and communities and is vital to healing the negative effects of colonialism and assimilationist schooling. 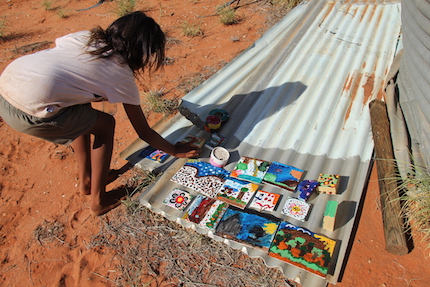 Says Kathleen Bradshaw, Pertame speaker and school teacher: “As a child, I too had negative experiences when speaking Pertame in front of others. Once when I was younger at school, I was told by a teacher ‘never to speak that lingo again’. From that moment I made a promise to myself that I will never forget my language and no-one will ever take it away from me.

“Although I have been away from my homeland for many years, my Elders ensured I kept my language intact and fluent. Language is an important part of our culture and a strong foundation of our identities.

The upcoming camp will be the second of four language bush camps to take place this year. (The next two will be held 6-8 July, and 17-19 August.)

Says Geraldine Stewart, Pertame woman and key organiser of the camp: “Having the opportunity to go out bush to where our language originated is the most important part for us. It’s about our children and grandchildren learning in a home and family environment, and learning from the bush itself. That’s how we learnt from the land when we were children, with our grandparents and great grandparents to guide us.”

The Fouress Foundation provided the seeding funds to get the school off the ground, after spending a weekend with the Pertame family on country. It is a family foundation that supports grassroots organisation in the key areas of Education, Children, Indigenous People and the Environment with a focus on Human Rights.

Its representatives saw first hand the passion and commitment of Christobel Swan and her family to their community, their desire to empower their own people, the deep connection to their land and the need to reignite their language.