No youth hub at Newland, but it’s not the end of the story

The writing was on the wall for a family bike and skate facility at Newland Park, literally: professionally-produced signs on fences along the street read “Hands off Newland Community Green Park. No concrete skate ramps or graffiti walls wanted here.”

They were the work of the Gillen Residents Action Group, whose members no doubt were among the 20 to 30 people who turned up on a chillly evening to the Town Council’s public consultation for the proposed facility.

The overwhelming mood of the meeting was to leave the park alone. They want it stay “green” and more than one speaker asserted that it is a “family park” already, well used by people from the neighbourhood.

There was some support for more facilities for young children. A proposal for two synthetic bowling greens, to be installed  in the northwest corner adjacent to the Gillen Club, replacing those at the Memo Club, was listened to with tolerance and some probing questions were asked.  But the suggestion of a bike and skate facility was rejected out of hand.

Why had Newland Park been identified for the proposal? one man insistently wanted to know. He dubbed it “Victim Park”, susceptible to having bits of its area carved out for other purposes. (The example was the Gillen Club’s 2400 sqm carpark, built on land formerly belonging to the park.)

The existing skatepark, next to the town pool, is only a few blocks away, so why have a duplicate at Newland Park? was another repeated challenge to the proposal.

A young man from the skating community told the meeting that the proposal had not come from them, for that very reason, it is too close to the other one. They want a new facility but “never to here”.

He said one reason for wanting a new facility is that the existing one is too cramped, leading to a “quite high” rate of injury. Skate parks elsewhere are more “spread out”.

More than one person brought up the poor state of the existing skate park and called on council to better maintain it. The “Victim Park” man actually listed a number of its defects and didn’t know how council “can not hang their head in shame” over it.

Where had the idea for a new facility come from? people wanted to know: “Who’s knocking your door down to put a skate park in here?” 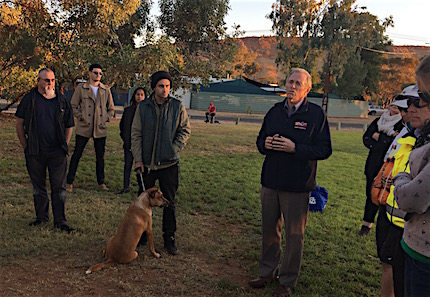 Mr Allen explained that the proposal had been brought to council by Councillor Matt Paterson.  Unfortunately he was not at the meeting, sending his apology, as did Mayor Damien Ryan, Councillors Eli Melky, Glen Auricht, and Jacinta Price.

Mr Mooney (pictured right) said the current strategic plan  contains a “whole list of aspirations for youth activities”, but there’s no masterplan. There was no “hidden agenda” behind the consultation, he assured the meeting: “We want to know how you feel, and we’ll take that back to council.”

Deputy Mayor Jamie de Brenni said this was a new way of working. Rather than officers spending hours on detailing and costing plans before putting them to the community, council was finding out what the community wanted first and then responding, giving the community “ownership”.

Numerous voices said that was so.

Is council open council is to considering other locations for a youth hub? asked Rainer Chlanda, youth worker and skater, who has recently argued in these pages for such a facility to be located in the CBD, keeping youth in sight and in mind.

It would be a shame, he said, to quash the whole idea of a youth hub because it might not work best at Newland Park.

“Let’s work out where it should go,” he urged.

Yes, seemed to be the answer from Mr Allen and Cr de Brenni. They are open to hearing concepts from the community and would go forward from there. There is no funding for any new facility anywhere at present. If a concept gets up, then council would try to source funding for it.

Had council ever considered an indoor facility, with multiple activities and staffed like the pool is with lifeguards? asked Phil Drummond, a BMXer who now has two young children himself and would like to have “a safe place” for them to go. It could be used all year round, with costs recouped through a small charge.

Nobody has ever put forward such a proposal, said Mr Allen, but “Come and see us,” invited Cr de Brenni.

By KIERAN FINNANE Mayor Damien Ryan seems to have given his clearest indication yet that he will contest this year’s local government election. Last Monday it...
Read more
Issue 4

By ERWIN CHLANDA A species of tiny creatures that have recently been found to be living right across aquifers of the gas-rich Beetaloo basin north...
Read more
Issue 4

By ERWIN CHLANDA Police Minister Nicole Manison (pictured) casts a wide net in her bid to justify that the Territory has the nation's highest per-capita...
Read more