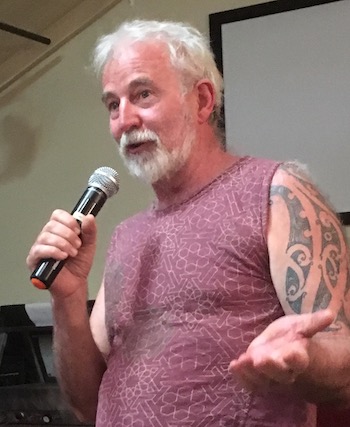 Mr Goldflam runs the local office of Australian Legal Aid and Mr McFarland was instrumental in the introduction of non-sniffable Opal fuel.

NEWS: Do you think take-away is the major aspect of the current problems caused by alcohol?

GOLDFLAM: About 70% of the alcohol drunk in the Northern Territory was purchased at a take-away outlet and drunk away from licensed premises. Take-away is certainly a highly significant issue. Licensed premises are, generally speaking, much more highly supervised than other places where people drink. The risk of someone getting hurt by a drunk is generally lower on licensed premises.

NEWS: What should be done?

GOLDFLAM: We have a road map, the review into alcohol legislation and policy by Justice Riley. The day that came out last year the NT Government committed to implementing all but one of the dozens of recommendations.

NEWS: That was the one stopping take-away on Sundays. 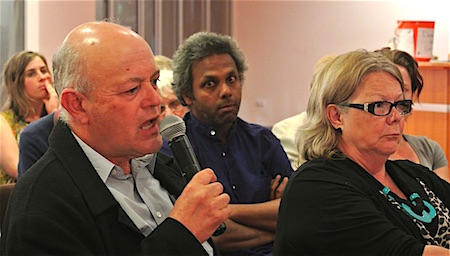 GOLDFLAM: (At left, speaking at a People’s Alcohol Action Coalition meeting in August 2016) Yes. That’s right. But the review recommended a broad range of measures, some of which will be how the new Liquor Commission works and how other agencies and people will work. We now also have a Liquor Legislation Amendment (Licensing) Bill.

NEWS: What are the most significant initiatives suggested by the Riley Review?

GOLDFLAM: For the new Liquor Commission, the most significant is that there be assessment of applications for licences which includes an assessment of the community impact of that licence. This is new. It’s often called risk based licensing. It means that if people and groups in the community consider they may be adversely affected by a licence being granted, they have the opportunity to make that case. The commission will be obliged to weigh up the benefits of the licence to the community, against possible harms. That’s going to have an enormous effect on the way in which applications are determined, and on the conditions which are imposed.

NEWS: It seems banning of take-away is not likely, but is there merit in making access to liquor much more difficult, especially for those generally regarded as problem drinkers? For example, that take-away liquor can be obtained only through online orders which would require a computer, access to email, a credit card and a home address where the liquor can be delivered.

GOLDFLAM: Is that something that someone has proposed?

NEWS: Online sales is frequently mentioned when take-away restrictions are discussed. I’m seeking your views about measures that would make take-away less accessible.

GOLDFLAM: There is talk about getting grog online. But I’ve never heard it suggested, and the Riley Review doesn’t suggest it, to restrict take-away to online sales. So there is no point talking about that.

NEWS: The administration of the NT can make any rules it wishes about access to take-away liquor. What kind of measures would you prefer or suggest?

GOLDFLAM: In my new capacity as a member of the commission it is not for me to propose and suggest ways to regulate. My responsibility will be to be part of a body which receives, hears and determines applications. The skills I am bringing to this are those of a lawyer. This is a quasi judicial body which makes administrative decisions. Rules of natural justice [the right of people affected to be informed about the process] will apply. There is an Act to be implemented and administered. That’s what this is about. It is not a political body which is out there pushing for this or that. It is to administer a statute, and to ensure people are given a fair hearing when they seek a decision. The commission decides whether or not to grant a licence and under what conditions. If there is a complaint about a licensee it is brought before the commission.

NEWS: Do you see the commission being a source of initiatives, or a body that responds to propositions and applications that are made to it?

GOLDFLAM: Primarily I see it as a body which responds to applications which it receives, rather than being a source of initiatives. But we are in a period of major reform of the administration and regulation of liquor, with the new Act coming in. There will be bigger reforms to the Liquor Act, which the government has already announced, as part of the recommendations of the Riley Review. The commission, this brand new body, will have a lot of work to do, creating the new framework. To some extent the Liquor Commission will be involved in new policy, the new era in regulation and licensing laws. But fundamentally the job of the Liquor Commission is to make decisions that are brought to it to make, rather than go out into the community and agitate for one policy or another.


Chair of the new Liquor Commission prominent legal practitioner Richard Coates “brings more than 40 years of legal expertise to the position, including experience as the NT Director of Public Prosecutions and CEO of the Department of Justice”, said Justice Minister Natasha Fyles today, announcing the appointment.

She also said: “There’s too much alcohol fuelled crime and violence in the Northern Territory and this Liquor Commission is the first step in tackling that.

“The former CLP government scrapped the Liquor Commission, locking Territorians out of a key decision making process relating to liquor licensing in their neighbourhoods.”

The Commission will operate as an independent statutory authority with extensive powers to regulate liquor licensing while the NT Liquor Act is being overhauled, she said.

A detailed response to the Riley Review outlining proposed changes to the Liquor Act is expected later this month.