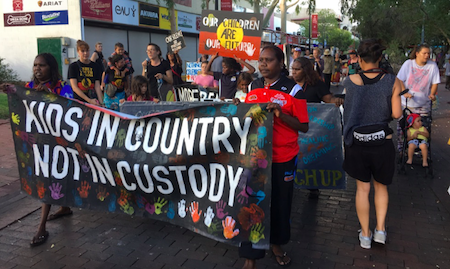 Bailing accused offenders to communities, something Police Commissioner Reece Kershaw last week mentioned as one of “the sorts of things we will be looking at,” may well herald an increased direct collaboration between law enforcers and Aboriginal elders.

Or, to state it bluntly, the elders and the offenders’ families would have a chance to show they are fair dinkum about playing a role in decreasing endemic levels of crime.

Managing police bail – as opposed to court bail – in the Police Southern Command is the job of Acting Commander Bradley Currie.

He says when exercising their power to grant bail police will consider the risk to the public, previous offending and the seriousness of the offence, plus other factors, bearing in mind “what’s best for the victim, public and the offender, to ensure he or she turns up in court”.

If police are opposing bail with a view to having the offender remanded in custody, then that is a decision that needs to be made by a judge. If bail is refused by police, the offenders can apply to the judge.

Into whose care are children mostly released? we asked Cdr Currie.

“I can’t say exactly what the break-down is but what often happens is they will either be bailed back to their relatives, their parents, or family member, or at times they will be bailed to a place of care where they are in the care of the executive officer of Territory Families. Kids can be bailed to their carer or their responsible adult”.

How many would be in the state’s care? “That would be a questions for the CEO of Territory Families.”

We put that question to Families Minister Dale Wakefield a week ago but have yet to receive an answer.

Equally, Cdr Currie says there are no statistics readily available to him about the number of offences being committed by youths already on bail. He says the release of crime statistics is a matter for the Attorney General’s Department.

It releases crime statistics six weeks after the end of each month, but details of offending by people already on bail are not included.

Crd Currie says the responsible adult would have to agree to bail conditions.

We asked him to comment on the bail support facilities currently being set up by the government, clearly because the system to date hasn’t been working. What would it need to achieve?

NEWS: Are police monitoring that bail conditions are abided by?

CURRIE: If someone is given bail then obviously police will monitor that, depending on the circumstances and the conditions of that bail. For example, if someone is bailed to be at home between 7pm and 7am then, at times, police will check on that.

NEWS: Will family and kin still be prioritised in releases on bail? Will bail support become the preferred option?

CURRIE: I can’t comment on the strategies of the bail houses. We bail to the responsible adult or carer allocated on behalf of Territory Families.

NEWS: Does the police decide who the young person is bailed to?

He says Operation Shilton, aiming to deal with the usual crime spike over summer, created “good results” in December and police expect there will be similar results for January.