29 become Aussies in The Alice 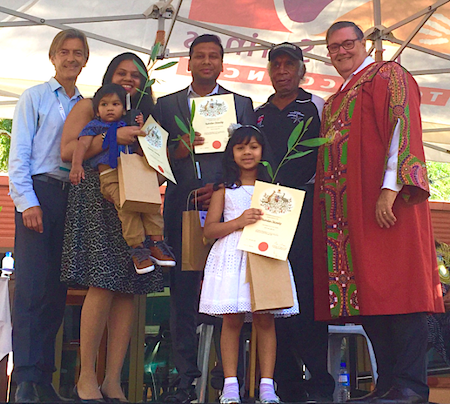 The nation has 29 new Australians after Mayor Damien Ryan conferred citizenship on them at the  Town Council’s Australia Day event this morning.

He says: “Our newest residents have come from countries such as Brazil , Philippines, Sri Lanka, India, Ireland, South Africa, Bangladesh and the United Kingdom.

“It is such a compliment to Alice Springs that people from all other the world choose to live here.”

“Today you see some of the oldest culture, represented in the Arrernte smoking ceremony [which opened the celebration] right through to the beaming faces of some of our newest citizens,” Mayor Ryan is quoted in a council media release.

He also presented the 2018 Centralian citizen awards. They are:-

She was selected for her outstanding contribution to the Running and Walking Club as well as other sporting events across the region.

Debbie also encourages people in the community to get involved and has been involved in raising awareness and funds for various health campaigns and charities.

Debbie exemplifies the spirit of community service; she serves as a role model, improves the overall quality of life of others and works tirelessly without recognition behind the scenes.

Celia has for many years collected bottles and cans from across the town for recycling. Celia uses the money to support junior golfers and to purchase books for children.

She was awarded the highest achiever for this course and has been a great role model to other students in her school and the community.

Shaqiena is also involved in community sports and always encourages others to participate.

Centralian Event of the Year – The Poppy Project

It was started three years ago to recognise those in the armed forces who protected Australia and those who still protect Australia.

The project makes poppies from donated materials and displayed them on Anzac Hill, the Council Lawns and in the gardens on Anzac Hill. Yeperenye shopping cenre also hung Poppy wreaths form its ceiling.

Jeff has been involved in many community events and fundraising efforts including Vinnies, the Alice Springs Wig Library, MusiKarma and the Motor Neurone Disease Association.

He is a strong supporter of the school nutrition program and has initiated an annual whole school community breakfast. In 2017 Jeff organised a Gala Dogs Dinner to raise funds for the Alice Springs Animal Shelter.