A say for rate payers shoved into 'confidential' 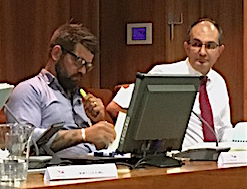 The Alice Springs Town Council is heading into stormy waters over secrecy as it sets sails into 2018, according to Cr Eli Melky: he says he is probing the legality of the move in December to cut the public out of having a say on spending half a million dollars a year.

The money has come to hand as a result of Cr Melky’s initiative earlier in 2017 to pay off the remainder of the civic centre loan.

The council decided on October 23 to “seek direction from the Alice Springs rate paying community about how to spend, through a public consultation process” the total amount of $528,000.00.

But at its last 2017 meeting, on December 11, the council rescinded the October motion in circumstances that Cr Melky describes as grossly improper: He says the issues had been discussed behind closed doors, and information was taken into account that is being kept secret under the council’s controversial “in confidential” policy. That information is not available to the public.

Mover of the motion to rescind, Cr Matthew Paterson, who had Cr Jamie de Brenni as seconder, argued that “following advice provided to the Council on November 30, 2017 by the Local Government and Community Development Division, Department of Housing and Community Development and council solicitor, I believe that council has no option but to rescind the previous motion in question”.

Cr Melky says all three documents were discussed at a councillors’ forum, off limits to the public, were immediately moved into “confidential” and cannot be referred to in a public council meeting – at risk of imprisonment. These documents “are locked in confidential,” Cr Melky said.

“The mover should provide that information so that all of us are well informed” and able to have a meaningful debate in open council, before people in the public gallery and the media, says Cr Melky. The December 11 meeting could have resolved to move the documents out of “confidential” but did not do so.

CEO Rex Mooney defended the process at the December 11 meeting, saying the information Cr Paterson was using from the Department of Local Government which “said quite clearly that council should not proceed down this course of action,” the council solicitor and an external auditor had “red flashing lights”.

Cr Melky also claimed the council had contravened the Local Government Act by failing to include in the municipal plan a purpose for the $528,000 which had been collected from the rate payers but no longer has any purpose.

“On the same night we paid out the loan … on that night we should have amended the budget,” said Cr Melky.

Mr Mooney acknowledged the municipal plan has to be amended but “it doesn’t require a motion. This happens as a matter of course, and the money can be used for a variety of purposes.

“In terms of process, councillors, we are on track,” Mr Mooney said.

The full October 23 motion moved by Cr Melky and seconded by Cr Glen Auricht said the council should “seek direction from the Alice Springs rate paying community, through a public consultation process, regarding the $460,000 loan principal repayment and the $68,200 loan interest repayment no longer required and collected in budget financial years 2017/18 – total amount $528,000.00.

“Option A: Community to have the full amount credited back on their rates.

“Option B: Alice Springs Town Council Elected Members to decide how to invest or spend the funds.”

This was amended by Cr Jimmy Cocking, seconded by Councillor Melky, that the council “seek direction from the rate paying community [on] option A or option B through a public consultation”.

Against were Mayor Ryan as well as councillors de Brenni, Paterson and Jacinta Price.

A division was requested by Cr Melky for the rescinding vote at the December 11 meeting: This time Cr Auricht changed sides.

At that meeting Cr Paterson referred to an “error of judgment” by the council, asking council officer to do something “which cannot be achieved.”

We need to “rectify this mistake. I apologise to the public for misleading them”.

Cr Melky commented at the meeting that it was not clear what Cr Paterson was talking about.