If society withholds social licence, would that stop fracking? 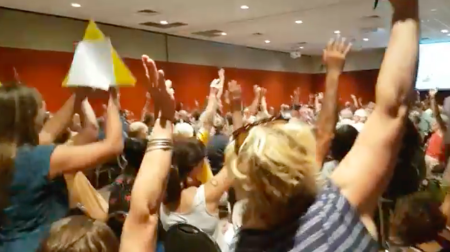 In the ongoing row over fracking, what does “social licence to operate” mean?

Consultants to the NT Hydraulic Fracturing inquiry, Coffey Services Australia, in deep water over messy community consulting by a firm it had engaged, defines social licence as “a measure of the acceptance of an industry within society”.

So, if society does not accept it, does that mean society can – by majority vote, for example – stop fracking?

Coffey also defines the key to the licence as the “information about how the communities’ concerns could be addressed”.

The suspicion that this is the case is hardened by the 11 recommendations which Coffey made in its social impact assessment report. They include:-

• Identification, assessment and management of the potential social impacts.

• Use the example of a possible unconventional shale gas project in the Beetaloo Sub-basin, which is where exploration is most advanced.

• Describe, with reference to the literature and examples from other jurisdictions, the concept of a “social licence to operate”.

There is nothing to indicate what the consequences are when society declines to give social licence.

Lauren Mellor, from FrackFree NT, says the Coffey report released last week fails almost entirely to reflect what it was told in the “consultations” it was paid to conduct in the Beetaloo area.

“There was no-one present who supported fracking at the Tennant Creek meeting, one person was undecided, and there was no support in the Borroloola, Ngukurr, Elliott, Katherine, Mataranka or Minyerri consultations,” says Ms Mellor. “I understand no-one attended the Daly Waters hearings.”

About the consulting flaws, Justice Rachel Pepper, head of the inquiry, said in a media release on October 7 last year that the inquiry “would like to express its profound dismay and concern at the comments allegedly made by Cross Cultural Consulting … engaged [by] Coffey Services Australia to conduct a social impact assessment on its behalf”.

But Justice Pepper also “reiterated that the role of the inquiry is to report on the risks and issues of hydraulic fracturing for shale gas in the NT.

If “community consultations” are made then their outcomes would surely be the focus of the resulting Social Impact Assessment, no matter how small the attendance at hearings and meetings.

Ms Mellor and her fellow activists have gone to considerable effort to get their facts.

“I attended the majority of community consultations,” she says.

“Audio recordings of these meetings are available in full.

“CAAMA undertook this work of recording and reporting on these meetings to ensure there was a higher degree of accountability this time around.

“The ABC video recorded the entire Mataranka meeting of about 40 people. They would also be able to provide a copy,” says Ms Mellor.

“The notes that Coffey themselves took, and made commitments to provide to meeting participants, would further reflect the strong anti-fracking sentiments being expressed.

“If the inquiry team defines social licence as ‘a measure of the acceptance of an industry within society’ then surely these conditions have not been met, given the opposition demonstrated during both this round, and previous, consultations. Now it is time for the NT Government to reflect these views and act to implement a ban.”

This morning we put the following questions to the inquiry, whose final report is now due in March:

• How many submissions have been received so far?

• Not including industry and government submissions, of those which express support or opposition to fracking, what is the split-up?

How many submissions have been received so far?

As of 22 January 2018 the Inquiry has received 530 written submissions. These may be accessed on the Inquiry’s website.

Not including industry and government submissions, of those which express support or opposition to fracking, what is the split-up?

The Inquiry has not undertaken an analysis of which submissions support or oppose fracking. This was not a requirement of the Terms of Reference. Rather, consistent with the Inquiry’s Terms of Reference, the Inquiry has identified the environmental, social, cultural and economic risks and impacts associated with hydraulic fracturing of shale gas reservoirs in the Northern Territory and examined ways that those risks can be mitigated to acceptable levels. Submissions have been sought and made on all of these risks.