Raising the bar: the art of keeping your shop safe 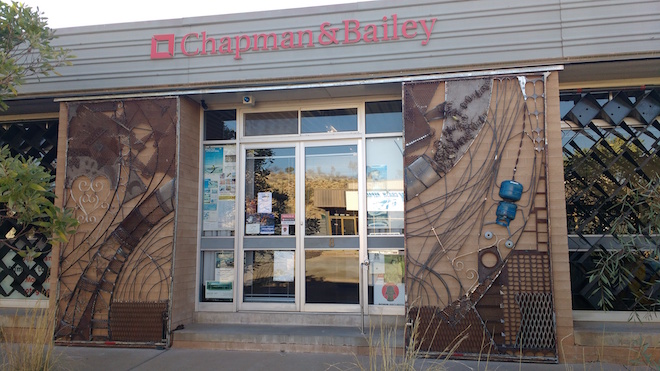 Grilles on shop windows that are things of beauty in themselves, from inside and out; gates at the shop entrance that are a work of art: instead of deadening the street with blank roller doors, they enliven it, while delivering the same security or better.

This recently completed work on the shopfront at 8 Hele Crescent mark it as a place for creative industry. Two windows and the entry are for the picture-framing and art supplies business, Chapman & Bailey; a third window is for Elbow Workshop, the studio of bespoke shoemaker James Young and designer Elliat Rich. Behind them, with entry off the courtyard is the gallery, Raft Artspace, and a charming small cafe operating out of a caravan, known as The Horse.

The larger part of the courtyard is actually a driveway and a carpark, but they have been developed with such attention to variety and detail, in every surface and function, including water-harvesting and native plantings, that you are almost unaware of the presence and occasional movement of vehicles. 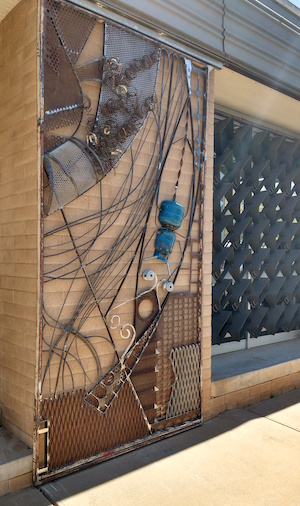 Property-owners Mike Gillam and Maria Giacon have steadily transformed this part of Hele Crescent, street numbers 4-8, from a site for light industry, showing the wear and tear of decades, to a creative precinct that expresses itself not only in activity but in its whole ambience.

Starting two decades ago, they took their cues from the sacred hill that rises behind the street and from the World War Two era shed at No 4 that anyone else would have likely bull-dozed. Everything they have done since has grown out of their respect for the local character of these icons, one of country and its ancient culture, the other, of humble human adaptation and ingenuity.

What to do to secure the business premises of their tenants has been the latest challenge, as for many landlords. The shed at No 4, which served originally as an officers’ mess, has been their muse. There, everything was made from materials at hand, from local hardwood to whatever else could be salvaged and adapted.

In this spirit, Gillam forever has his eye out for what can be repurposed from other people’s waste. Sometimes the newfound role is purely aesthetic, like the sheet of cutout plate metal that has become a courtyard sculpture (Gillam’s art has been to recognise its character and install it in this way); at other times materials are reused to new ends. The window and entrance gates at No 8 combine a bit of both.

The grilles are made up of some 50 solar battery boxes, each cut into 4 angular sections – so 150 cuts with an angle grinder. The sections were then joined together with around 780 welds per grille, if Gillam remembers rightly – an enormous effort credited to David Boffie, a qualified boilermaker who works with him on the maintenance and development of the properties.

The boxes have been arranged in diagonals and their repetitive geometry combined with their depth creates a dynamic play of light and shadow, in pleasing contrast with the simple rectangular proportions of the recessed windows and building, and imparting something of a Middle Eastern character.

This is also the effect from the inside, where the grilles enhance privacy and protect from glare while avoiding the feeling of a cage. The apertures are quite large so that a view onto the street is still clear: from inside you can be perfectly aware of what’s going on outside. In urban design terms this is called “passive surveillance” or “eyes on the street”, known to contribute to perceived and real safety. 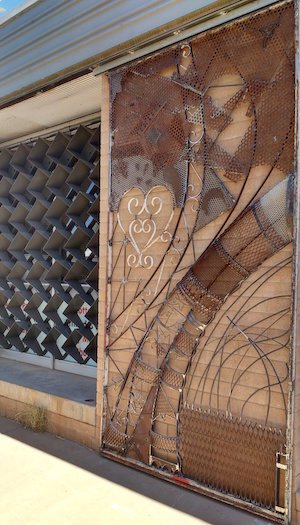 The grilles make a very strong visual statement. A less daring designer might have felt constrained to have the gates reflect much the same aesthetic. In this case, except for the fact that both are made almost entirely from recycled metals, the two designs could scarcely be more different.

The predominantly organic lines and forms as well as the unmistakable presence of a large beetle (the green beetle or irlperenye of Arrernte mythology, even if this one is blue and made from gas bottles) are the clues to reading the gates as a representation of and homage to the local landscape.

The arching trunk of tree and branches soon becomes apparent, the canopy massing to the left. Hanging from it is a large ‘love heart’ in wrought iron, counter-balancing the beetle on the right. Fluttering up from the ground on the left are a variety of desert moths and the huge cossid moth that lays its eggs around the red gums.

Ominously there is smoke curling out of the tree trunk hollow, recalling the recent devastation to many grand old river red gums in our town. This may be what has caused the eyes and mouth, in the suggestion of a human face below the beetle, to open wide in horror.

A lovely section of sweeping long lines swirls through the middle when the gates are closed. Although Gillam says he was thinking of the lines of senna bushes, this reads more as an expression of the ethereal qualities of light and life in the landscape. (The round steel rods used in this section are the only new materials.)

This work sets a whole new standard for securing streetfront premises while adding enormously to the appeal of the public place that is the footpath and road. It will undoubtedly contribute to the creative identity for the businesses at this location, offering a memorable experience for customers beyond their immediate reason for visiting.

Gillam says he is designing for “some of the country’s greatest artists who go though the doors of Chapman & Bailey”, rather than reaching for the lowest common denominator response to security problems.

His strategy is “to delight” both customers and passers-by, and for those who may not be receptive, then “to baffle and confuse”. He thinks it’s important to counteract the widespread sense of mistrust that is being conveyed by proliferating roller doors and tall opaque fences.

This level of design and craft comes at a cost of course, but there are hidden costs in the roller-door syndrome (photo below): the depressive effect it must be having on business and is certainly having on amenity and our sense of who we are as a community. 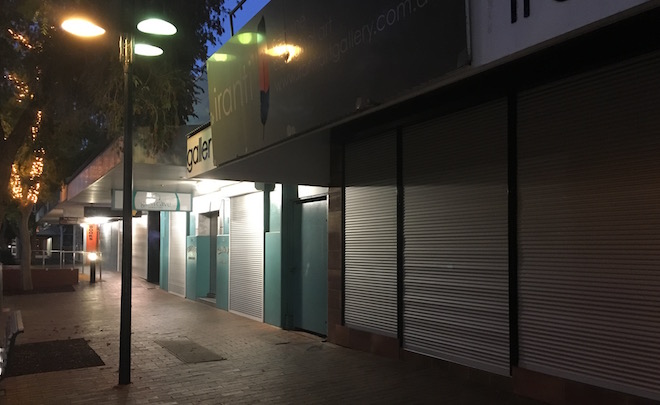