Flood report a trickle, not a banker 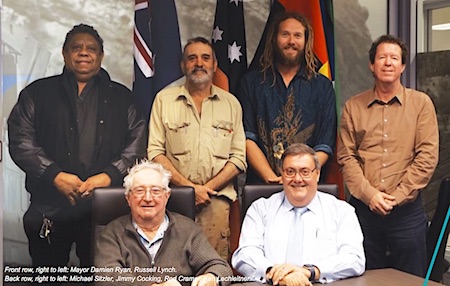 Both candidates for Mayor in this month’s local government election are serving on a committee charged with finding ways of preventing catastrophic and potentially life-taking flooding of Alice Springs.

The committee has made virtually no useful progress in a year and a half.

The Flood Mitigation Advisory Committee was set up in February last year and includes incumbent Mayor Damien Ryan (front row at right in this photo from the report) and the challenger for the top council job, environmental activist Jimmy Cocking (standing, second from right. The others, standing, from left are Ken Lechleitner, Rod Cramer and Michael Sitzler, and seated  is Russel Lynch).

In June last year the committee published a draft report that made six recommendations about preliminary investigations and structural mitigation.

One year later, on June 21, Member for Braiting Dale Wakefield released the committee’s final report with almost exactly the same recommendations except for minor additions, and the deletion of the sixth (a geomorphologic study).

Not a single one of these recommendations has been enacted, including the first one which calls for “detailed topographic data to be acquired for the upstream catchments of the Todd River to allow further investigation of potential mitigation options to reduce the peak flow of a flood.”

No further flood planning can be done until these topographic data are available, says Mr Cocking, but he understands the NT Government is now calling tenders for the work.

Chairman, Mr Ryan could not be contacted but we have left messages requesting comment and will publish it once received.

When the tenders have been let, the best part of two years will have passed since the formation of the committee and before any meaningful work to protect the town can even begin.

The topographic data will be obtained in the second half of 2017, according to Ms Wakefield who in a media release said: “I’d like to thank the members of the committee for their considerable efforts in bringing this report together, and in particular, Mayor Damien Ryan as chair.”

If a storm such as occurred at Numery Station on January 18, 2007 strikes in the Todd catchment area, parts of the town may be obliterated, with significant loss of life. (If you use the link see lead story, “No action on killer floods”.)

Another big rainfall event occurred in December 2016. According to the Bureau of Meteorology, on the 25th, Wulungurru (Kintore) had a 24-hour fall of 231.6 mm which was a 1 in 100 year event. A similar event would be possible in the Alice Springs region.

It is broadly accepted that climate change will seriously heighten the risk of flooding as ferocious downpours like these become more frequent. Mr Cocking agrees with that assertion.

The committee may be re-inventing the wheel: The Alice Springs Flood Mitigation Dam environmental impact statement of October 1990 comprehensively deals with the issues.

The dam was knocked on the head by Canberra (google this site for comprehensive coverage) but the moratorium imposed has now expired.

Mr Cocking is not sure how many people have died in the floods but “from what I understand it’s close to nine in total since records began,” he says.

Is that number mentioned in the report? “From memory, no,” says Mr Cocking. Doing a “find” of the report for death, drowning and died seems to prove him right.

There would be “catastrophic risk if we have a one in a thousand [year] flood that we are unprepared for,” says Mr Cocking.

“There is the possibility, if there was a cloudburst with hundreds of millimetres of rain dumped within the catchment, that we could face a catastrophic flood that would sweep through town quite quickly.

“The monitoring equipment we’ve got is inadequate to give enough time to evacuate key areas.”

He says emergency services would send text messages “but for people who don’t have mobile phones there is limited capacity to let them know about a rapid onset flood”.

The recommendation for “an assessment of all existing trunk (major) drainage infrastructure” requires a conversation between the council and the Territory Government, he says, except “there has been some passing of the buck.

We put to Mr Cocking that nothing has been done in the last 12 months on an issue where lives are at risk. “Have you said anything about this in a meeting of the committee?” we asked.

Mr Cocking answered this by saying there had been a meeting in May this year with Treasurer Nicole Manison when she announced funding for the topographical survey.

This was nine months after the election of the Labor Government.

Says Mr Cocking: “The Territory Government had changed, obviously, and [the flood issues] had not really been brought to the attention of the new government, that this was a priority for us.”

Making this point “you would normally leave to the chair of the committee,” Mr Cocking says.

Was there something stopping him from raising the issue vigorously much earlier?

“I raised it when I had the opportunity.” He didn’t say when and with whom.