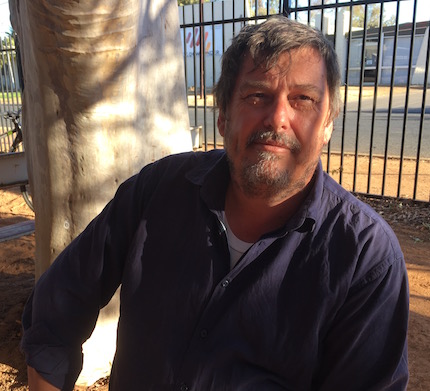 Alice Springs has to learn to “not hit the panic button too early”, says Town Council candidate John Adams, referring to the most recent spike of concern over crime and antisocial behaviour, in particular by young people, and the negative publicity that has flown from it.

“It paints a picture of the town that is not attractive for tourists or people thinking about living here” – and we need both.

For the second time in a day a candidate is speaking to me about arresting our declining population, although Mr Adams expresses some scepticism over the Census count of Aboriginal people (which shows a decline). He’s not convinced that it accounts for their mobility. As well, he says resident population numbers don’t reflect the pressures on the town as a service centre for “a big chunk of Australia”.

Numbers matter as “economies are built on people” but we also need to better tap “the potential around Indigenous employment”. He speaks of “fusion economies”, naming art, ranger services and social services as examples in which Western and Indigenous skills can be brought together.

A national Indigenous art and culture centre – on the NT Government’s agenda for Alice – would build on the town’s existing reputation as a place to experience Indigenous art, but he also thinks the town could do more to promote its broader artistic life and its attraction as a place for making art, given its wonderful light, big sky, grand old trees and magnificent ranges.

He laughs: “Perhaps that’s because of who I’m married to”, referring to Sarah Brown (picture below right), a highly successful landscape painter alongside her day job of running the Purple House network of dialysis services. (The couple have three children: Tessa, who at 22 years is working as MLA Chansey Paech’s electorate officer, while studying political science; Paddy, 20, doing an electrical apprenticeship; and Riley, in his last year at Centralian Senior Secondary College.)

Alongside all this, our young people need looking after and the council needs to do better at advocating for the right kinds of services to respond to their needs.

With a background in social services as long as your arm, in both government and non-government services, in town and out bush, Mr Adams speaks with some authority.

Council has recently focussed on lobbying government for the reinstatement of the Youth Street Outreach Service (YSOS) but this alone would be no panacea. A whole lot of things need to happen hand in hand and, critically, the effort needs to be maintained, he says. Governments will often spend the money on services while things are bad, then pull the plug when they improve, only to find they get bad again. 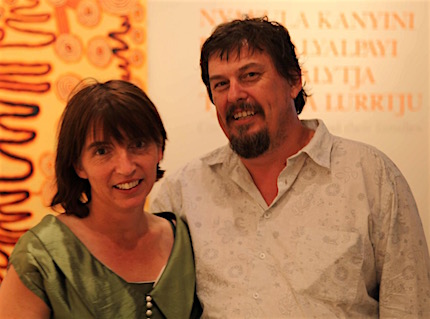 He speaks of the importance of well-resourced school holiday programs, taking into account the young people who will come into town from remote communities for the holidays. They need a place to congregate and without one, they will congregate in public spaces.

The shires also need to be supported to have holiday activities out bush: “We can’t pretend that there’s a wall around the town.”

Apart from activities, young people also need structure. His experience tells him that if a program ends at 10pm most kids will then go home and go to bed, but without structure they may well wander around till 3am.

But what about the children who don’t have a safe place to sleep?

Mr Adams formerly worked in the child protection system on the investigative team.  Part of their routine was to ensure they had access to six emergency beds each weekend but they very rarely had to use them. With the right staff, the right skills and knowledge of the community, they were usually able to find a safe place for children within their extended families. Only occasionally would they use one or two of the emergency beds for the early hours of the morning before contact with family members could be made.

(The government is calling for proposals for service providers to deliver supported bail accommodation programs in Darwin and Alice Springs.)

Mr Adams says the Care and Protection of Children Act should be used to respond to the needs of children, especially those under 10, out on the street late at night. But critical to this is the employment of senior practitioners with local experience, able to make assessments centred on “the risks to the child”. Without this, too many children end up in the state system and “the state is not very good at growing up kids”.

He says the 12th Council has been right in its insistence on the reinstatement of YSOS to initiate these kinds of assessments (referring children if necessary to the child protection system), but Territory Families Minister Dale Wakefield is also right to emphasise the need for more engagement with young people, particularly when they are 15 and older.

Given the regular recycling of youth issues to the forefront of community and council preoccupations, Mr Adams says his intimate experience of the whole system would be “helpful”.

But this is not the only string to his bow. Before his social services career he was employed by a petrol company as a budget supervisor. He has also done company director training and has been in charge of managing big contracts and services.

Running services is like running a business, he says, with all the same concerns over recruitment, housing for staff, budgets, and delivery of the product.

This background gives him the skills to scrutinise council’s budget, to understand, for instance, how a large surplus appears to have been accumulated.

Council needs to get much better at communicating its financial position to the community, to be able to explain why rate increases occur, how its landfill fees are arrived at.

If elected, he is committed to transparency on these issues.

He says all tiers of government are hesitant to make bold decisions. In the federal sphere he names marriage equality and the treatment of refugees as examples. On the local front, he speaks of the dragged out issue of flying the Aboriginal flag on Anzac Hill.

“It is not about race,” he says. In the recent debates no-one on the 12th Council has been able to articulate the core issue: that the hill has different meanings to different groups of people.

“As Australians we believe that people can have a range of beliefs,” he says, so respecting this fundamental Australian value should allow the issue to be simply resolved.

His extensive experience of working with Aboriginal people, including a decade spent in bush communities, and within Aboriginal organisations – currently Tangentyere Council, where he is the Coordinator of the Individual Support Program – would be another useful understanding he could bring to council, which has struggled to have effective relationships in this area.

“I’d certainly like to see all organisations and levels of government in better communication with one another,” he says. Again this is a role he has had in various jobs, initiating inter-agency meetings in the youth services area, and networking between the CEOs of the major organisations.

Council in recent years has been dominated by people with a small business background. Having representation from the NGO sector would broaden council’s understanding of the challenges the town faces.

Effective services bring money and jobs to town as well as help tackle its issues and so contribute to the town being “a nicer place”. Mr Adams’ message is, “we are all in this together”.