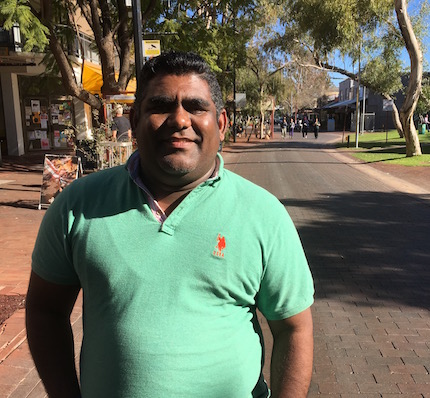 “It’s a peaceful place, it offers time and atmosphere.”

That’s how John Paul Sirus describes his adopted home town of Alice Springs. After five years here he is putting himself forward as a candidate in the Town Council elections.

But the focus of his Town Council campaign is determinedly on whole-of-town issues, in particular on how we can tackle its declining population* and lagging economy.

Interestingly, in this discussion he doesn’t turn immediately to ‘fixing the town’s social problems’ – the crime and anti-social behaviour, especially amongst young people, that have so many feeling angry and anxious.

He thinks our small town, which on the whole is a “close-knit community”, is getting these things out of perspective. Before moving to Alice he and his wife Shinto were living on the Gold Coast. There were crimes committed there every day, he says; they would be reported in local media and then everyone would move on: “There’s crime everywhere, Alice is a small place and we make it big news.”

He laughs off the idea of a night-time curfew: “What other Australian town has one? Why should we?”

“Have a conversation” is his answer to the issue of young people on the streets late at night: find out what is happening for them, they are the ones who know: “Support them to make decisions about their lives.”

And in the meantime, talk up all that is good about the town, which has members of his community moving here in such numbers. His native language, Malayalam, is now the second-most spoken language in town, after Filipino / Tagalog and excluding Indigenous languages and English.

When he mentions “time” as one of the town’s positive attributes,  he’s thinking about all that time that is yours when you don’t have to spend it commuting through city traffic. Instead you can be anywhere within five minutes.

Nonetheless, more is required than simply a promotional effort or morale-raising, and the double graduate in law and physics from Mangalore University (Karnataka State, India), who works here as a personal banker, has some concrete suggestions for growing the economy and population.

Council could lobby for Alice Springs to be granted status as a special economic zone, where for instance tax relief and investment incentives would apply. He is not aware of any examples in Australia but such status has worked, he says, for places like Bangalore in India, Silicon Valley, USA and Shanghai, China.

Council could also lobby for Charles Darwin University to develop its Alice Springs offerings and campus to attract international students.

And like many, he says something has to be done about the expense of air travel in and out of Alice Springs. It’s significant enough to stop people moving here and we need more people, full stop: “If people keep leaving, the town won’t be here anymore. And at present there’s no strategy in place to arrest that.”

More immediately within council’s powers, he suggests that the Todd River should be better cared for and promoted as an icon of the town: “It’s unique,” he says, but it’s rarely used as an icon image of what we have on offer.

A keen cricketer, he says sporting facilities need to be well-kept and used to promote the town as a sporting hub, with more national fixtures.

Sports are a great way for people within the community to intermingle. Cricket and volleyball matches have been his main way of getting to know people and the town.

Local infrastructure also needs attention, with improved roads and footpaths – of the latter, he says they must be the worst in Australia.

Already Alice is a place of “many good memories”, where he and Shinto, who works as a nurse, look forward to raising their children: their first, twins, a boy and a girl, arrived just a fortnight ago.