Alice to Venice through Indigenous eyes

Above: The Australian Pavilion in Venice.

Tracey Moffatt, as Australia’s representative at this year’s Venice Biennale, is part of a movement of Indigenous artists working with photography and the moving image. In May this year I was privileged to travel from Alice Springs to Venice to share in the unveiling of Tracey’s exhibition New Horizons created for the Biennale.

That experience made it all the more interesting to come back and see Resolution: New Indigenous Photomedia, showing at Araluen on tour from the National Gallery of Australia (to 12 August, installation view at bottom). 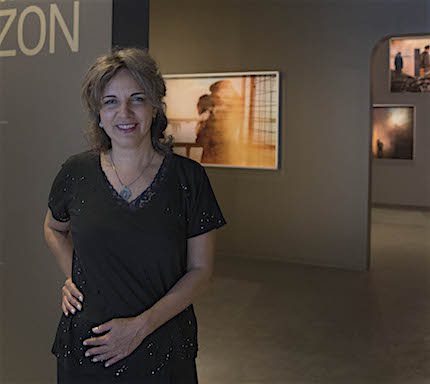 The foundations of the work come from the 1980s when artists including Tracey Moffatt, Michael Riley, and the Boomalli collective, documented the events around the Bicentennial marking 200 years of white settlement. From that time Indigenous photomedia artists, including  Alice Springs local Warwick Thornton, have continued to make thought-provoking work, re-interpreting histories and identities in new ways, leading viewers to see the world and history and contemporary Australia through different eyes.

Left: Tracey Moffatt with a view through to the galleries.

Although Tracey Moffatt spent more than a decade living in New York, only recently returning to Australia,  these core concerns continue to be evident in her work. Her distinctive voice through lens and screen over the past thirty years made her a stand out choice for the artist to represent this country in Venice.

She created four new works for the Biennale – two photo series and two moving image pieces. On show until November, the exhibition is the icing on the cake for art lovers in a city that is already dripping with art.

I worked with Tracey at the beginning of her artistic career, producing the short film Night Cries: A Rural Tragedy, which she wrote and directed. It went on to be in competition at the 1990 Cannes Film Festival.

Night Cries references the classic Australian feature film Jedda. Tracey and I came to Alice Springs, to meet with Rosie Kunoth-Monks, who had played the lead in Jedda alongside male lead Robert Tudawali. While Rosie was not interested in being in our film, Marcia Langton, who was working at the Central Land Council at the time, was. Marcia was a great choice for the role, and her performance was important to the film’s success.

Above: Installation view of the Body Remembers series.

Since that time Tracey has established an international career as a photographer and videographer, as well as directing several films. It was great to see her work in Venice, a trip which took me from the extremes of the middle of Australia, where the water runs underground, to Venice where water is everywhere with its 177 canals traversing 56 kilometers.

When Tracey and I were working together to create Night Cries, she held her first major photographic exhibition, Something More, at the Australian Centre for Photography in Paddington. It was a standout success.

Since then, 1989, access to the means of creation of photography and video has become much easier for everyone – think camera phones, go pros and drones as the latest of this. However, this does not make all images equal.  It is the content, the voice of the artist that makes images stand out. 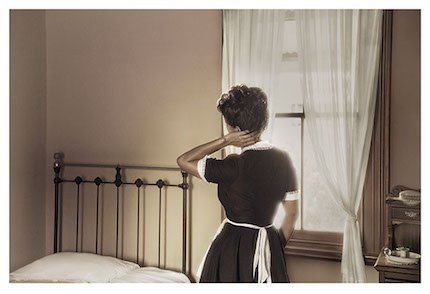 Tracey is an important Australian artist. She joins fact and fiction to create new ways of seeing. Her work, in still photographs, moving images and sound is underpinned by themes of the violent collision of Aboriginal cultures and colonialism, as well as issues of gender and sexuality. In this exhibition, she also explores the plight of refugees and the attitudes that many Australians have towards them.

In floor talks at the Biennale, she made it clear that for her, finding a location often comes first and stimulates her imagination. The stories of her photographs, videography and films are fictions but are based on fact. She uses actors, models and staged set ups, and works to push the images in the photographs, rather than document social history.

“I’m not interested in realism in my artistic practice. I’ve never been interested in straight documentary although I look at it often. Of course I look at the history of photography. It’s a big influence. I’ve thousands of books of the photo-image and I’ve studied it all my life. I’ve many influences, paintings and so on…poetry often inspires me.”

She spoke of the American poet Elizabeth Bishop and quoted a few lines from her poem “Insomnia”: “into that world inverted / where left is always right / where the shadows are really the body / where we stay awake at night …”

Tracey’s Body Remembers is a series of ten huge prints deliberately hung high, so that the viewer must look up at them. The images are of a woman in servitude, domestic help, neat and primly dressed, in spaces of abandonment – a glaring landscape and ruined building. The images are soft, mature, and yet disturbing. The woman is portrayed as demure and alone,  looking to the horizon, or in an unforgiving flat landscape next to ruins of stone buildings, in a dark dress with white lace on the collar and cuffs. We never see her full face, which keeps us wondering – what is the woman dreaming of, perhaps a life of ‘something more’?

Tracey herself performs the role of the housemaid, which was the life of survival for many Aboriginal women, who contributed to building Australia. Among them were some of  Tracey’s ancestors.

“Often my work is based on family history. The women in my family, my great great grandmother, my Aboriginal grandmother [who] worked on a remote cattle station in outback Australia as a cook in 1910. And also my mother was a domestic, she worked for a doctor in the 1950s. She ran away. It’s a little bit about family history but I go other places with it.”

This work is about memory and the location could be anywhere. Tracey spoke about the shadows in the work, and the techniques of opening up the shutter and pushing images and working and reworking until something new and surprising emerges. She didn’t frame the work, as she wanted the texture of the paper, the ochre colour to give the feeling that the images came out of the earth and were hit by the sun.

Above: Installation view of the Passage series.

The light is more mature, softer, more sensuous, as opposed to the stark colour work in the series Passage. Its images are strong, of a woman, a man and a baby, on the waterfront on the docks.  Tracey shot the first image of the series, ‘Mother and Baby’, many times:

“I had a very sentimental composition in the beginning and I knew it wouldn’t work. The image that I went with has the mother figure disappearing into a cloud, a yellow murk, a fog. The child, the baby is squirming away. He might forget his mother, he doesn’t want her, she might be leaving him. He might remember the feel of her, but no longer remember her face.”

Tracey posed a question to the Venice audience: how would you read it as a woman? Someone responded, “Mothers are always fading out.”

The characters in all twelve images slip in and out of the shadows: “It is based on the real things that are happening in the world today, about people wanting to cross borders illegally.”

It has a heightened realism in the saturated colours, composition and dramatic tension found in each image.

Overall in  New Horizons, the images may be located in Australia’s past, Tracey’s own past as an Aboriginal woman, and the past of her family, in a nation that often wants to gloss over and forget its foundations, but the stories also resonate with what is happening now. 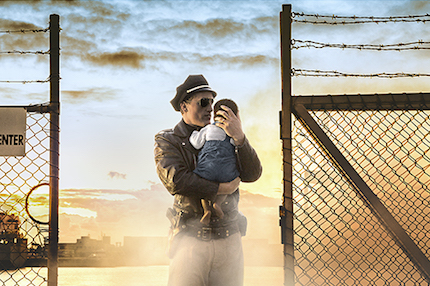 In Vigil, which is a two-minute montage of images, viewers safely watch through a portal, as disaster unfolds on television: a boat loaded with refugees is smashed apart, bodies left afloat.  The accompanying music is menacing, reaching a dramatic crescendo. The viewers are Hollywood movie stars, including Elizabeth Taylor.

Left: ‘Cop and Baby’ from the Passage series.

Tracey researched and borrowed these images of the people safely inside looking out, while the overloaded boat splitting asunder is also taken from real news footage of refugee disasters. She intercuts the images, looping over and over through the same two minutes of voyeurism and disaster. It builds in intensity and horror,  mesmerizing to watch  as viewers standing by safely just as Australians have done over many iterations of ‘turn back the boats’.

As Tracey said during her floor talk, “If they weren’t dark skinned and dressed strangely, if they were Swedish girls in bikinis, everyone’s going to take them. It’s because they’re dark people, and they’re dressed weird, and they might be Muslim. God Forbid!”

The White Ghosts Sailed In is a two-minute video looking out through Sydney heads in 1788, alluding to the arrival of white settlers in Australia. It is based on the conceit of a film being made in 1788 and having been lost for more than two hundred years. It is ironic, and seems absurd, although it makes a strong point in terms of the gaze of the viewer,  who is asked to imagine being on the shores in 1788, a moment in time that changed the history of the Australian continent forever.


Penelope McDonald, formerly head of Screen Territory, is an independent producer and film-maker based in Alice Springs.

Images of Tracey Moffatt, her works and the Australian Pavilion courtesy Australia Council for the Arts.