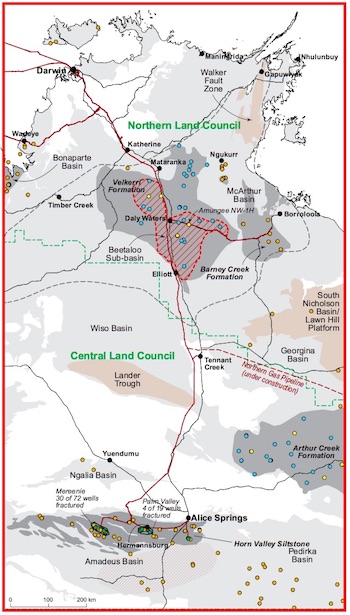 “The anxiety, if not hostility, surrounding fracking was on display during the first round of community consultations held by the Inquiry.

“Overwhelmingly, the message received from the people who attended these meetings was that fracking was not safe, was not trusted and was not wanted in the NT.”

Surely then, should that not be putting the lid on the whole fracking issue?

But then again, “having said this, it should be recognised that these are not universally held views.

“Many (how many?) groups and individuals have expressed the opinion to the inquiry that properly regulated (what is properly?) and adequately safeguarded (what is adequate?), the onshore extraction of shale gas by hydraulic fracturing could be beneficial (could it be the opposite?) for the Territory, creating employment opportunities and raising much-needed (how much needed?) revenue.”

These quotes are from the Summary of the InterIm Report published by the Scientific Inquiry into Hydraulic Fracturing of Unconventional Reservoirs in the Northern Territory. The questions in brackets are ours.

The 290 submissions are published on the web, but while we can put a face to the 1000 people who gave their views at 37 public meetings, and – to a point – the 181 in online feedback, the opinions expressed in other types of consultation are far less overt. Who are the submittors? Who’s behind them?

So what is the enquiry all about? It makes clear what it is not: “The ultimate task of this Inquiry is not to recommend to the Government that it retain or lift the moratorium presently in place— that is a matter for the Government.”

That is clearly so, but you can bet your bottom dollar that the government – showing its cards by its enthusiastic support for the northern pipeline – is going to cherrypick the final report due by the end of the year and say: “As the enquiry pointed out …”

For the record, “the work of the Inquiry is to, based on the most current and best available relevant scientific data and literature, assess the environmental, social, cultural and economic risks associated with hydraulic fracturing for shale gas in the NT.

“In doing so, the Inquiry must sort fact from fiction and weigh up claim and counter-claim in making its assessments and in formulating its recommendations.

“Following the risk assessment, the [inquiry] panel will determine the mitigation measures that are available to reduce the levels of risk to acceptable levels.”

Let’s get this clear: The inquiry takes the view that there are mitigation measures, and that they are capable “to reduce the levels of risk to acceptable levels”. Acceptable to whom?

“The primary and most consistently raised issue across all community forums was the potential impact … on water resources (surface water and groundwater) in the NT, both in respect of human use and dependent ecosystems.”

If the methodology of the inquiry were democratic instead of scientific, then this would be the end of the process: The majority is against fracking, so here shall be none of it.

“The most frequently raised potential adverse social impacts … on local communities related to rapid increases in population, conflict in the community between those for and against gas development, an influx of Fly-in, Fly-out workers and the negative impacts of a “cash splash” (a rapid injection of money into the community).

“There was a significant amount of scepticism expressed about the true value of any economic benefit created by shale gas development, especially in terms of employment, public revenue generation and royalties.

“There was a strong belief that those who bore the risks of the development would not receive the benfits. Many participants considered that investing in onshore unconventional shale gas, rather than in renewable energy, would result in an opportunity cost to the community and to the Government and that the Government should not be ‘investing in a declining industry’.”

The “yes, but” approach pervades the interim report: “There is evidence to indicate that well integrity has been an issue for the onshore shale gas industry; however, recent technological improvements in the design and construction of shale wells has resulted in a considerably improved performance in the integrity of modern wells when compared to earlier wells and legacy wells.

“Effective water management will be crucial to the potential development of any unconventional onshore shale gas industry in the NT.

“This involves first ensuring that water is used at a sustainable level, and second, ensuring that surface and groundwater quality is maintained.

“The Inquiry has reviewed and summarised the available information relating to NT water resources, the production and composition of waste waters produced by the hydraulic fracturing process, and the management, treatment and possible reuse of these waste waters.

“The Beetaloo Sub-basin (between Tennant Creek and Katherine) is used in the Interim Report as a case study for a preliminary analysis of water resources and water use because it is the most prospective area in the NT for shale gas development, and, importantly, it is the region where the best information is available.”

Portions of the report are upbeat about fracking.

“The panel’s preliminary assessment is that the impact of onshore shale gas operations on surface water supply in semi-arid (such as the Beetaloo Sub-basin) and arid areas of the NT is relatively low.

“Where adequate toxicological information is available, the chemicals used in fracturing fluid appear to have low toxicity, and at the concentrations used in hydraulic fracturing fluid, ingestion would be unlikely to represent an acute health risk.

“The panel is still investigating the potential for contamination of drinking water aquifers if leakage of wastewater was to occur as a result of leakage from the well itself or from a spill.

“Further information is being sought on the likelihood that contaminated wastewater would seep through the soil profile and what dilution and dispersion would occur within the aquifer.

“The design and implementation of a robust regulatory framework is the principal way in which the NT Government can facilitate the development of any onshore unconventional shale gas industry in a manner consistent with the principles of ecologically sustainable development and in conformity with community expectations.

“Submissions to the Panel have indicated that the current system of governance for onshore unconventional gas development is deficient and needs to be strengthened to ensure these goals are met. The panel agrees.”

You can just hear spin doctors chiming in: “We are going to have the most robust and strong regulatory system in the whole wide world.”