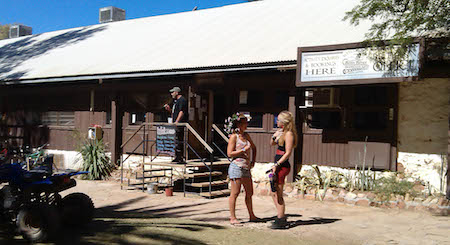 Providing adequate facilities under the agreement is squarely the responsibility of the department, yet when five youths absconded last Friday, staff did not have proper communication technology to alert the police and the neighbouring Ross River Resort (pictured), where the five are alleged to have broken in and stolen a car, cash and alcohol, and which is “an easy walk” from Loves Creek.

Bushmob CEO Will Macgregor wrote to Territory Families CEO Ken Davies late yesterday, saying “the meeting we instigated with your officer today failed to assure Bushmob of an adequate response to redress the serious safety and security issues arising from inadequate infrastructure and technologies at the department’s facility”.

He says Bushmob entered into the pilot partnership in the “sentenced rehabilitation camp for male offenders aged 12-17 years of age” following “an approach by the department based on Bushmob’s demonstrated expertise of working with high risk offending young people for almost two decades.

“Bushmob was contracted to provide only the operations that were prescribed by the department. The department retained responsibility for facilities, assets, and infrastructure … prescribed the referral criteria, staffing model, program design and managed the partnerships and consultations .… at Loves Creek Station 115 kilometres  from Alice Springs and less than an hour’s walk from Ross River.

“Our expertise was not adequately engaged during the development or operation of the pilot.

“The ongoing safety and security issues arising from inadequate infrastructure and technologies pose an unacceptable level of ongoing risk to staff, young people, to the community and our organisation.

“The typical profile is of extreme social exclusion characterised by poor health, limited school attainment, and multiple sources of trauma from witnessing and being the victim of violence, neglect and abuse.”

With reference to “flight risk” Mr Macgregor points out to Mr Davies (at left) the absence of “appropriate supporting infrastructure and technologies such as fencing, lighting, security cameras and communications.

“This is standard across residential services to mitigate a range of risks including of absconding, until trust is established and young people can internalise an alternative behavioural and life trajectory.”

He says the breakdown in the partnership “is fundamentally the result of difference in philosophy and expertise.

“It has also been exacerbated by unstable department structures and responsibilities. While there is no doubt of an intent to establish an appropriate alternative to detention, this has not however, translated through the department’s approach to program design, facilities and collaborative practices.

“The water supply which is trucked in, has been regularly disrupted due to poor road conditions arising from an ineffective maintenance schedule.

“The diesel supply for electricity generation has also been regularly disrupted due to breakdowns in the supply system managed from Darwin.

“The cool room is inadequate to store perishable items for the occupancy.

“While Bushmob has acted cooperatively and pragmatically to resolve issues (by, for example, taking on logistical tasks regarding fuel) this is not sustainable and is a drain on limited resources.

“The effectiveness of the supervision and monitoring provided by Bushmob has been undermined by the absence of security cameras, lighting and fencing. These would have overcome the practical difficulties of monitoring the potential for suicide, absconding and violence posed by the innumerable blind spots and exit avenues created by the layout of the facility.

“It is incomprehensible that while every other residential facility in the NT is fitted with appropriate monitoring technologies and infrastructure, this is not the case at Loves Creek Station although it is established for high risk sentenced young people.

“Despite being fully aware of vehicle offences occurring, the department has consistently declined to support a vehicle compound or other security as is standard in remote service locations throughout the NT.

“As a result, Bushmob have instigated the unheard of operational procedure of locking vehicles by a steel chain to buildings.”

Mr Macgregor says fences and security lighting are an accepted standard for residential facilities throughout the NT.

“This is first a means of protecting young people such as from intruders. In the current context fencing also provides a barrier to enable staff to talk people down from absconding and to identify exit points to expedite appropriate responses.

“Although the facility is catering for children who are offenders with a high risk of flight, the department has declined to install this simple deterrent and safety measure.

“There is no serviced airstrip available in the event of an emergency medical evacuation by air.

“The satellite phone coverage is intermittent and weak and there is negligible internet.

“The commitment by the department to a satellite upgrade never translated into action.

During the recent absconding incident staff were unable to contact Ross River Homestead by phone and were only able to contact NT Police after numerous failed attempts where the satellite call went interstate.

“Had adequate infrastructure and technologies been available during the pilot, issues such as the absconding incident of last week may have been deterred, and would most certainly not have resulted in further offending.”

The police made the following statement:–

Members from Strike Force Winx have charged a 16-year-old male who allegedly absconded from a youth diversion facility on Friday, July 7.

Detective Senior Sergeant Peter Malley said the offender was arrested yesterday at the Alice Springs railway yards after a three kilometre foot pursuit about 9am.

The youth was charged with unlawful entry of a building, damage to property, stealing, aggravated unlawful use of a motor vehicle, drive unlicensed, breach of bail, hinder police and resist police in the execution of their duty.

He was remanded in custody to appear in the Alice Springs Local Court today.

17-year-old Ethan Jones is the last remaining absconder who is still outstanding and police are asking for anyone with any information regarding his whereabouts to contact them on 131 444.

Territory Families made the following statement:–

This is a disappointing decision given the significant funding and support from Territory Families to BushMob over the previous 10 months.

Territory Families has over this period invested $110,900 into infrastructure upgrades at the facility, including installation of universal locks and steel lock plates, air-conditioning to all accommodation rooms, extensive road-grading, multiple safes, and a new generator. Additional works to the value of $180,000 are planned this financial year. BushMob has received $2.485 million to deliver early intervention youth programs since June 2016 (funded till December 2017).

A review was recently commissioned by Territory Families to consider the effectiveness of early intervention youth boot camps run across the Northern Territory. A number of recommendations are included in the review which is available from the Territory Families website.

This review forms part of a significant body of work being undertaken by Territory Families to reform the Youth Justice space and will also be informed by the recommendations of the Royal Commission into the Detention and Protection of Children.

Providing an alternative to detention is an important part of our youth justice reforms and this will continue with a new provider that is able to effectively deliver this service.

Territory families will work with BushMob in regards to their proposed exit strategy and consider alternate arrangements, including supporting any youths referred to complete the program, and undertaking procurement processes for a new service provider.

Opposition Leader Gary Higgins said yesterday in a media statement that Chief Minister Michael Gunner had claimed wrongly that there are no studies anywhere to support youth curfews. Mr Higgins contradicted that, citing a review by Elyse Grossman in the American Journal of Preventative Medicine.

Council: instability at the top

By KIERAN FINNANE After just six months in the job, the Town Council's Director of Community Development, Kim Sutton, has resigned. The resignation appears to be...
Read more
Issue 7