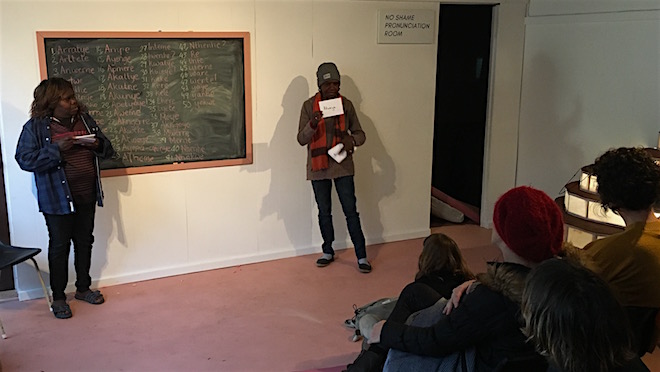 Above: Lorrayne Gorey (left) and Veronica Turner take learners through their paces at Apmere angkentye-kenhe (A place for language).

It might be well intentioned, but when a non-Aboriginal person addresses an Arrernte woman as ‘kungka’, it is not well received.

The Pitjantjatjara word for woman has become well known, perhaps in part because of the long-term presence of Rayleen Brown’s catering business, Kungkas Can Cook. 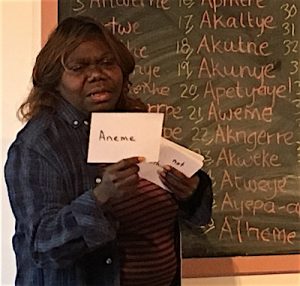 But Pitjantjatjara is not the language of this place, Arrernte is, and people living and working here should learn the basic Arrernte words, says Lorrayne Gorey (left – ‘aneme’ means ‘sitting, being, staying’). If someone, for instance a nurse at the hospital or a police officer, calls her ‘kungka’ she will correct them. ‘Arelhe’ is the Arrernte word for woman.

On Wednesday evening, unusually damp and bleak for Mparntwe (Alice Springs), some 20 non-Aboriginal people turned up to practice their new Arrernte vocabulary, drawn from the word list promoted by the Apmere angkentye-kenhe (A place for language) project in the refurbished old op shop behind Flynn Church.

Mrs Gorey and Veronica Turner good-humouredly rehearsed pronunciation and understanding, then tested the ‘class’ (below). Three participants were judged worthy of a prize – one of the project’s specially made tote bags (available for sale), bearing messages in and about Arrernte.

Speaking to the teachers later about what the project means to them, both were clear that non-Aboriginal people should acquire Arrernte – just as they had learned English, which was hard for them, it should be reciprocated. 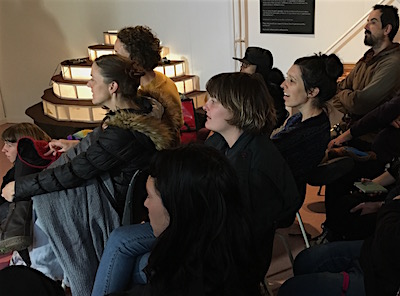 But their chief concern is for their young people to maintain their language. Many in the next generations are speaking in a mix of English and Arrernte, but both women want them to speak Arrernte, and speak it in the right way.

Mrs Gorey speaks only Arrernte to her children. If they use English at home, she’ll correct them, tell them to say again what they mean in Arrernte.

The language is about who they are, says Mrs Turner, daughter of Margaret Kemarre Turner OAM. And this is true for non-Aboriginal people learning too: to learn the language is to better understand Arrernte people because “we are teaching from our ground, our land, our apmere.”

Apmere angkentye-kenhe continues to 9 July, with some days programmed for Arrernte families. The next open session is on Monday, 10am-2pm, and in the evening, at 5.30, the project will host a a public forum for the opening of NAIDOC week, the national theme of which is “Our languages matter”.

There will be a facilitated discussion about current concerns for the Central/Eastern Arrernte language of this place with speakers including MK Turner, Harold Furber, Veronica Dobson, Joel Liddle, Amelia Turner, Lorrayne Gorey, Felicity Hayes, Margo Smith and others.

Experience Aboriginal culture in the heart of the CBD

What bird is that? Artetyerretyerre!