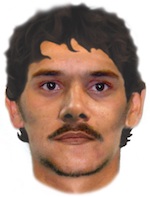 Alice Springs police have released a comfit (pictured) of a man wanted in relation to an alleged assault.

It is alleged the offender assaulted a 57-year-old man when he was getting out of his car.

Police describe the offender as tall, slim and of Indigenous appearance, aged between 30 and 40.