Court placing itself above the community? 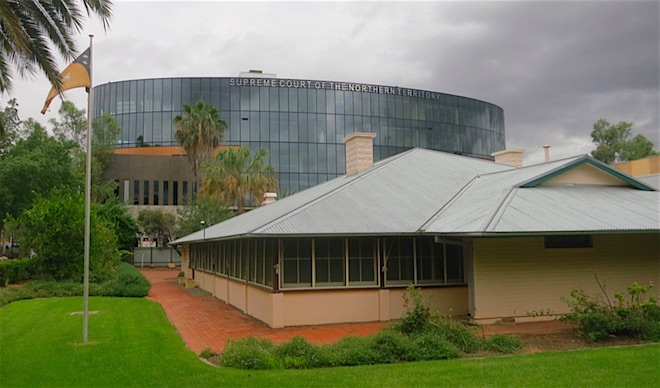 Above: Dwarfing The Residency, the new Supreme Court in Alice Springs. Photo by PIP McMANUS.

“By its size and singularity of design this building might suggest to some that this court seeks to place itself above the community. Any such impression would be entirely mistaken.”

So said Chief Justice Michael Grant, presiding over the ceremonial sitting of the Supreme Court that inaugurated its new Alice Springs facilities today.

“Members of this court are keenly aware that court buildings are important symbols in a  community governed in accordance with the rule of law,” he said.

“We are also aware that different  people and groups may respond differently to structures and built environments and draw different conclusions concerning its symbolism.” 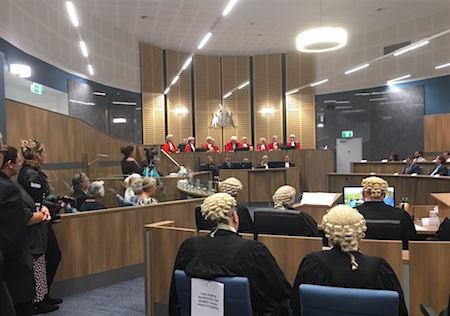 But far from setting themselves above the community, judges are there to serve it, “not the other way round,” he said.

He welcomed the “considered public debate” about the symbolism of the new building, mentioning in particular a “thoughtful evaluation” by local architect David Havercroft of the court’s “physical manifestation and functionality in the cross-cultural context”.

He said Mr Havercroft ultimately concludes that “fairness and justice are functions of the judiciary and the legal practitioners involved and the proceedings of the court”.

With that in mind, Chief Justice Grant  acknowledged that the building “sits on land and in an area in which the Arrernte people have lived since time immemorial”. He also acknowledged the many other language groups congregating in Alice Springs, mentioning Pitjantjatjara, Pintupi, Luritja, Warlpiri, Warumungu, among many others.

“This court has long extended its respect to their elders and to their laws and customs to the extent that those laws may be taken into account under the laws passed by the Commonwealth and the Northern Territory Parliaments,” he said.

The court has also long recognised “the continuing stewardship of those people over the various lands in Central Australia” and  “the social, economic cultural and other disadvantages to which Aboriginal peoples have been and continue to be subjected”.

Speaking on behalf of the Northern Territory Solicitor-General Sonia Brownhill also addressed the matter of the building’s design.

The government required simply that the building be architecturally impressive, iconic and in a style “commensurate with the dignity of the court”, she said.

She drew distinctions between “the somewhat ostentatious rhetoric and symbolism” associated with other court buildings and rated this one as a fitting reminder that just administration of the law and its observance by citizens are “fundamental to the maintenance of civilised life and the mutual freedom of Territorians”.

As for functionality, the new building which houses two courtrooms, will allow for the simultaneous conduct of two jury trials Alice Springs as well as enable the Court of Appeal or Criminal Appeal to sit locally.

On the architecture of the new building in the context of the townscape, John Stirk, speaking on behalf of the NT Law Society, observed that the Commonwealth of Australia, via the Department of Prime Minister and Cabinet, occupying the floor above the court, will once again “look down upon Alice Springs”.

He also noted that the robing room lacked facility for wig storage: “a portent of things to come or a function of design by committee”. 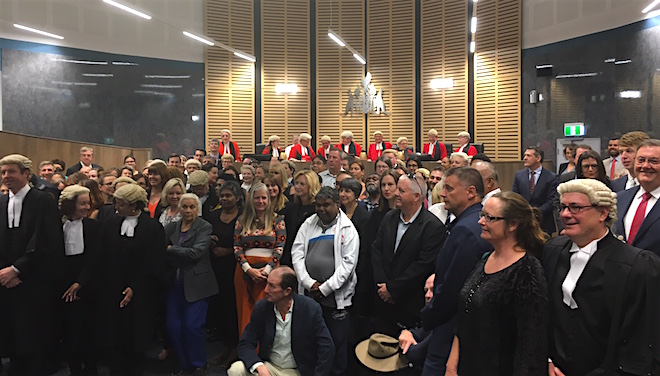 Above: At the end of the sitting the Chief Justice invited all attending to pose for a photograph.

Russell Goldflam, speaking for the NT Bar Association, began with a short greeting in Arrernte.

He noted that sitting in the court today were the heads of the legislative, executive and judicial arms of government.

It was to the legislative arm that he made his most emphatic remarks, calling for reform in the matters of recognition of traditional Aboriginal law and mandatory sentencing.

In passing mandatory sentencing laws, the legislature is essentially saying that judges can’t be trusted, he said.

He quoted Justice Dean Mildren on prescribed minimum mandatory sentences as being “the very antithesis of just sentences” and referred to the “cruelty of our murder sentencing laws” which  continue to produce “grave miscarriages of justice in tying the hands of our judges”.

Noting that the vast majority of the people coming before the court in Alice Springs criminal proceedings are Indigenous, he doubted that, for them, it would make “that much difference how flash the building is as long as the story remains the same”.

And in that story, “when it comes to sentencing and indeed in most matters, we do not notice, we do not recognise and we do not allow Aboriginal law”.

He quoted Justice Stephen Southward, among the judges on the bench in today’s sitting, on the effect of the Commonwealth law that prohibits judges from having regard to Aboriginal traditional law for assessing the objective seriousness of an offence for sentencing purposes: “It distorts the well established sentencing principle of proportionality.”

It also means, said Mr Goldflam, that “for the foreseeable future we should expect that many Aboriginal people who enter this building will feel that they are entering a foreign country, that the law that matters for them, doesn’t matter.”

He concluded by hoping that “the legislative arm will press ahead with the reforms urgently required to let Your Honours do your job properly and justly, and remove the unnecessary fetters imposed by statute.”

She noted that the new court building sits “in the spiritual heartland of Arrernte country,” not far from the old tree that is a “very important spiritual site … in the Dreamtime of this region.

“The physicality of this new building looms over [the tree] just as our law looms over all Aboriginal people of Central Australia,” she said, also pointing to the Commonwealth law criticised by Mr Goldflam.

She likewise took issue with “a legal system that fetters judicial discretion with mandatory sentencing” and which “has led to the disgracefully large and disproportionate incarceration rates of Aboriginal people”.

However, she too acknowledged that “a court is more than just a physical structure”, recognising the “sensitivity” of the Northern Territory courts to the human rights of Aboriginal people, by for instance observance of the Anunga Rules around having proceedings explained to and interpreted for Aboriginal people  in their own language.

She welcomed the additional space of the new facilities, in contrast to what could be the very over-crowded foyer and courtroom of the older facilities. But she also lamented the distance to the courthouse lawns: she had often stood in wig and gown on the front stairs of the old building, wildly gesticulating to the family members of clients to come in, or else had run up and down the street looking for her client. At least her fitness is now likely to improve, she joked.