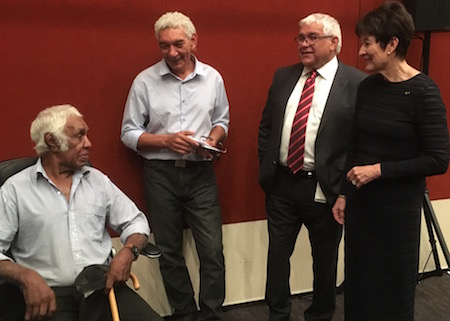 Many of the issues coming to light before the Royal Commission into youth detention in the NT were clearly outlined in an internal memorandum produced by the Professional Standards Unit (PSU) at the request of then Corrections Commissioner Ken Middlebrook.

At right: Arrernte elder Peter Wallace (seated) with Greg McAdam and Commissioners Mick Good and Margaret White. At the recent Alice Springs hearings Mr Wallace welcomed the work of the Commission for what “you are trying to do  for our young ones”.

Mr Middlebrook had asked for a review of issues in youth detention after the tear-gassing incident at Don Dale (in which he himself took part) made notorious by the Four Corners report (image below) that sparked the Royal Commission.

That incident took place on 21 August, 2014. The review was handed to Mr Middlebrook one month later, on 19 September.

Undertaken by the director of the PSU, David Ferguson, it clearly pinpointed many of the issues that have since been brought painstakingly into focus by the taking of evidence at the Royal Commission.

In their interim report made last Friday, 31 March, the Commissioners sum these up as follows:

The conclusion of the PSU memorandum pointed clearly to the way forward:

“It should be obvious to anyone that if you treat youths like animals by not communicating, threatening, belittling them, withholding food and other entitlements they will react in an aggressive way. Most of these incidents were most probably entirely preventable with the use of appropriate communication and open interaction with the detainees combined with a regular routine to keep them occupied.

“The positive response of YJOs once provided with direction from prison staff, clearly indicates that most YJOs are capable of performing appropriately once they are shown what is expected of them and follow up is provided to them to reinforce that they are doing the right thing.”

At the time these words were written Mr Middlebrook had more than a year in front of him as Corrections Commissioner (he resigned in November 2015) and it took almost two years before Four Corners blew the lid off the broken system.

The existence of this memorandum and apparent failure to take up its learnings is yet another example of the NT’s pervasive “culture of commissioning reports as a substitute for action” that has been referred to by Senior Counsel Assisting the Commission.

The Commissioners note in their interim report that they expect to hear further evidence on this memorandum as public hearings progress. (Mr Middlebrook is expected to give evidence in the week commencing 24 April 2017, as is former Corrections Minister John Elferink.)

The present NT Government has started to implement reforms. The Commissioners note the new youth justice officer training period of six weeks and its focus on rehabilitation, including training about the impact of trauma on children and young people. They also note the recruitment of 25 new YJOs, including 11 women and 12 Aboriginal people.

However, they also note the complexity of the task that these YJOs will be confronted with: “Many children and young people enter detention with serious cognitive disabilities, mental illness, addiction to nicotine, alcohol and other drugs as well as physical deficits such as poor hearing and sight, and, in some cases, also functional illiteracy. These factors impact on their behaviour and ability to conform to the rules within a facility.”

Their acknowledgement of these reforms is not the same as “backing” them (as headlined in the Chief Minister’s media release in response to the interim report). They do, however, explicitly “welcome” the $18.2 million package of initiatives – including the provision for 52 youth diversion workers based in Darwin, Palmerston, Katherine and AliceSprings – to address crime and to break the cycle of offending, announced in February.  In contrast, they specifically warn against a commitment of funds at this stage to any immediate upgrading or building new detention centres before the Commission completes its work and makes final recommendations.

“While there is no doubt that the current facilities are not appropriate places to house youth detainees … decisions need to be made about the more fundamental question of what kind of facilities are required, and where they should be located. The Commission is examining these questions in its inquiry, including considering the most appropriate model for detention facilities in the Northern Territory.”

Their recommendations are likely to include specific remand facilities, separate to youth detention centres. They note that the majority of the youth detainee population today are on remand, awaiting trial or hearing, and a significant proportion are in detention for breaching the ‘non-criminal’ conditions of a bail order.

Alternatives to custodial orders and remand conditions as well as issues relating to bail will be examined in future public hearings.

The Commissioners note but do not comment upon the NT Government’s recent legislative amendments to expand the use of electronic monitoring bracelets.

They make clear that the goals of any youth justice system are to reduce youth crime and build safer communities. They acknowledge the high level of public concern about both, which to date the system has been failing to address. They have heard that a greater focus on rehabilitation and restorative justice is likely to lead to safer communities – an approach strongly backed by Aboriginal Peak Organisations of the NT. More evidence about this approach will emerge in coming hearings.

To date the focus of the Commission has been more on youth justice and detention than on the other half of its brief, which is child protection. Its attention will shift more to protection issues in the coming months.

In the interim report the Commissioners note that placement instability and having an experience of being in out-of- home care are strong indicators of potential involvement in the youth justice system. They note the difficulty of early intervention in remote settings and say “responding to the issues of remoteness in the Northern Territory will be a fundamental consideration” for their  recommendations.

They acknowledge “the continued impact of intergenerational trauma on Aboriginal people within the Northern Territory” and its link to the over-representation of Aboriginal children and young people in out-of-home care and youth detention.

They go into some detail on the impact of trauma on brain development, not only in early childhood but also in adolescence.  Health issues for children and young people will thus form “a significant part of the Commission’s considerations as it moves towards making its final recommendations”.  These considerations will undoubtedly include the NT’s per capita rates of alcohol and tobacco consumption – the highest in the country – and  high consumption rates of methylamphetamine (‘ice’) and MDMA.

The Commission’s final report, with comprehensive recommendations to guide the government in making sustainable change to both youth detention and child protection systems, is due on 1 August. As the Commissioners say, the task in front of them is “considerable”, but the objectives are clear:

“The Northern Territory deserves a safer community where youth crime is at a minimum.

“The children of the Northern Territory deserve to be treated with respect and dignity, with every child in out-of-home care or in detention given a real opportunity to reach their full potential.”