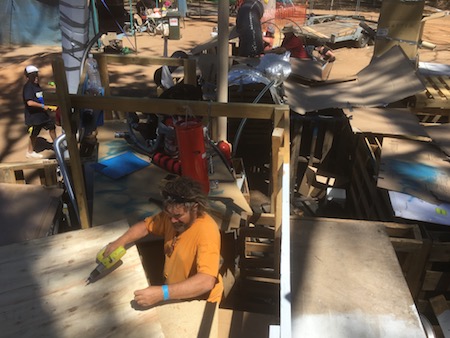 The Melanka block story has a new chapter: From being the place for an eight story complex that, over the years, turned out to be pie in the sky, it was turned into a space station – in a flash.

This is how it happened over the weekend: The Intergalactic Federation Rebels commissioned the construction of the station and as work proceeded, sent Inspectors along to make sure all was good.

Tragically, the Inspectors turned Pirates and extorted money from the Builders.

They in turn could get help from the Ewooks and the Rebels, who, in exchange for working hard and learning such skills as a thousand and one uses of duct tape, tying Scouts knots or building a space station, would give them money (“Silvers”, aka washers) that would allow them to buy such things as titanium (aka grey paint) for radiation shielding of the space station.

This is only a fraction of the story and I’m not sure I’ve got this totally right, but in any case, at the end of the two days the north-eastern corner of the block was covered in moon buggies, rockets, a giant crane, launch towers, a silver space dome and other out-of-this-world assets. 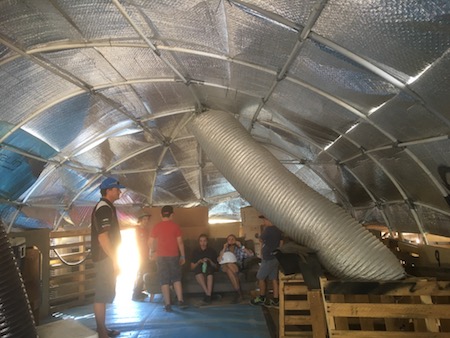 The kids built extensions to the space station, spreading in all directions and becoming known as Shanty Town, as well as windsocks, aerials, catapults.

The Shanty Town got a second floor.

There were 130 kids and 70 Droids (known as parents in their day jobs), who had to do as they were told by the kids. Droids could give advice but not instructions (except when there was risk of a space disaster).

It was the brainchild of Eugene Blom, with a team of scout leaders, to rocket boost interest in the local Scout group, whose membership number is dwindling.

Parents and local businesses helped in droves. In fact as word got ’round Mr Blom could stop canvassing for help as his phone was running hot with offers of assistance.

“In my memory as a Scout leader there’s nothing bigger that I can remember, ever, in terms of one single Scout activity,” says Mr Blom.

“Kids learned so much, and every time they did they got more Silvers.

“And we needed to re-program some of the Droids who stepped in too much.” 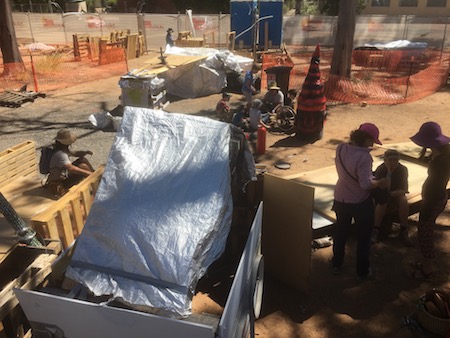 Sentiments towards staying in the Northern Territory have grown since before the pandemic, especially for young people. This is what Northern Institute researchers found at...
Read more
Issue 3

By JULIUS DENNIS Following an investigation under the Associations Act 2003, a Statutory Manager has been appointed to the Yipirinya School in Alice Springs, indicating...
Read more
Issue 3

By ERWIN CHLANDA The government will push ahead with its proposed national Aboriginal art gallery on the Anzac Oval precinct no matter what is decided...
Read more