How to cope with a 40 degree Sunday 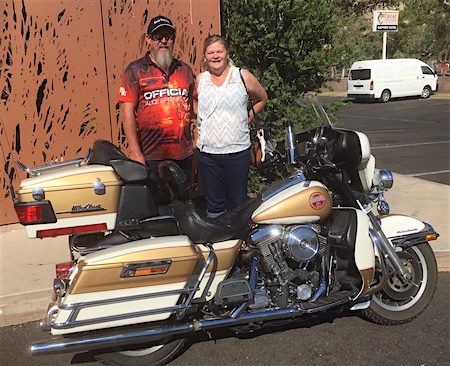 It’s easy. Like-minded people proved that by driving and riding to Ross River and back on Sunday, 160 km, in 40C.

The beauty of the East MacDonnells further helped taking their mind  off – well – the heat.

The recommended procedure for sane people is to jump into their pool with a snorkel before mid-morning and not re-surface before sunset.

But the drive works better, so long as you are nuts about your two or four-wheeled conveyance and have plenty to talk (brag) about with your travel companions who are equally obsessed.

You don’t need air-conditioning: It just doesn’t belong in an historic car built before the word was known.

Not that this worries Wayne Phillips who rides a 1994 Ultra Classic 1500cc Harley Davidson. He is pictured (top, right) with wife Rowena. She follows him in her car – which is air-conditioned.

The preceding weekend Wayne and 89 other bikers took themselves to Glen Helen on a Black Dog ride. 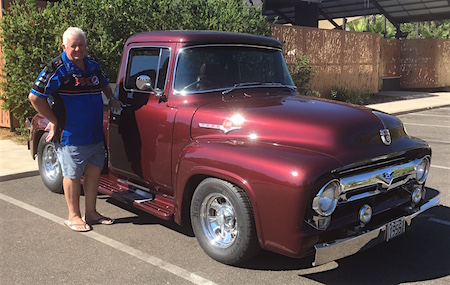 He said they all rode out in a tidy pack doing around 100 but on the way back he had to give the Harley a bit of  handful. As you do, on a hot day. To increase the airflow.

Greg McArthur’s 1956 Ford V8 F100 (at left) , immaculately restored, does have aircon but then again it also has a modified engine, gearbox and diff.

Greg says he uses the ute in Street Drags (not meaning on a public road; it’s just a name for a race on the drag strip) and it will star again at the Centre NATS, in the cruise through town and the static display.

Mark “Buddha” (as in the one who has achieved a state of perfect spiritual enlightenment, thereby attaining nirvana; nobody knows me by my surname, he says) has a 1969 Chevelle with a big block and no air-conditioning.

He is pictured (below right) with his travelling companion, son Jacob Bootha (now the secret about the surname is out).

Someone who definitely has air-conditioning is Tanya Spoehr (below) who drove to Ross River a supercharged GT Mustang 351 which is brand new, has so far hardly been out of first gear around town, and was being unleashed on its first open road trip. 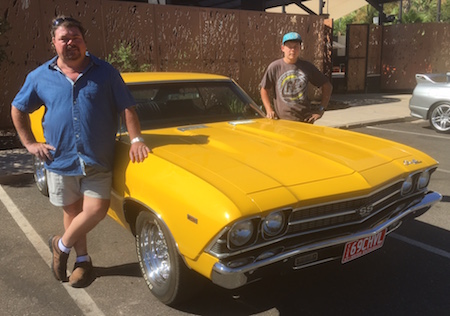 Money is a somewhat academic issue in connection with machines their owners are in love with. Feel free to make an offer – but the answer is most likely to be: “No, thanks”.

After the ride Jeremy said the day went well: “Had a good chat with friends, could have been a bit cooler as it was like riding through a fan forced oven. But hey, you get what you are given and it is  fun all the same, come rain, hail or shine.”