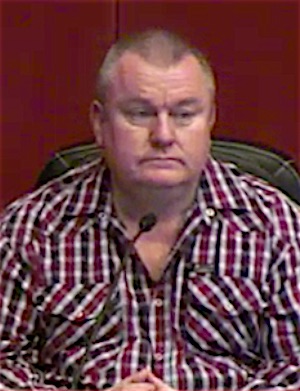 Evidence to the Royal Commission from training officer Derek Tasker at the Alice Springs Juvenile Detention Centre was interrupted this afternoon  just as he was about to give detail on the centre’s weak points making it vulnerable to escapes.

Mr Tasker was complaining  that its poor security record was down, at least in part, to infrastructure. He estimated there had been some 20 escapes from the centre since it opened.

He said the fenceline is “totally inadequate” and that it’s  got to the stage where the government needs to be advised that something needs to happen.

Part of his concern was the way escapees were exposed to police pursuit, including the use of police dogs. He described a recent escape involving three detainees, where a police handler let a dog go, and “the young fella” was bitten on the leg and wrist. He had to be operated on that night.

The detainee may have done the wrong thing but he should not have been put in that position, said Mr Tasker.

He wanted to point out deficiencies in the building itself, when Solicitor-General for the Northern Territory Sonia Brownhill interrupted, invoking a “public interest immunity concern”. 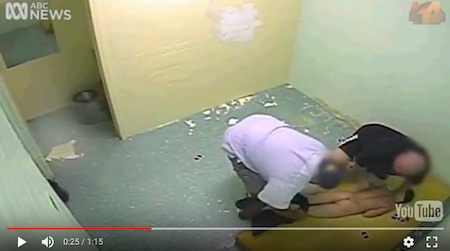 Mr Tasker, whose name, since the airing of Four Corners’ program Australia’s Shame in July last year, is strongly associated with events involving Dylan Voller while in detention (including that shown in image at right), is still employed at the ASJDC. In fact he is in charge of training of its new recruits.

While Dylan Voller has given his evidence to the commission, it is proposed that the evidence in response to it from various employees of the Territory be dealt with at a later stage.

Mr Tasker was questioned today particularly about how he handled, while Officer in Charge at the ASJDC, complaints from a female officer about sexual harassment. Her complaints included that another officer, a man, was making comments of a sexual nature to detainees.

Mr Tasker couldn’t recall although the complaints were contained in an email chain which he had annexed to a recent statement.

Memory refreshed, Mr Tasker said he raised concerns with the staff member and with his superiors in Darwin.

The mail chain reveals he told the officer a formal caution was warranted and that the officer replied: “I understand, I will keep my mouth closed”. He also brought to Mr Tasker’s attention that he was not the only staff member “talking like this”.

What further enquiries did Mr Tasker make about this?

He couldn’t recall, but did think the Deputy General Manager, Michael Yaxley, came down from Darwin to handle the matter.

It was put to Mr Tasker that investigators into one incident concerning Mr Voller said of him (Mr Tasker) that he had “little to no knowledge” regarding juvenile detention policy and procedures.

Mr Tasker disagreed with this assessment. He might not know them word by word but they were there in the office to access if he needed them; in his 20 years in the system he had never known anyone to be aware of all of them.

He will return to the stand tomorrow.

Today’s session concluded with the commissioners warning against intimidation of any witness or intending witness.  They were aware that some young people, both in and out of detention, may be being subject to intimidation, which is a serious offence, punishable by up to five years’ imprisonment.

Sarcastic and negative comments could be seen as intimidatory and self-righteousness would not be a good explanation for making them, the commissioners warned.

They are also concerned about confidentiality breaches.

Facebook
Twitter
Pinterest
WhatsApp
Previous articleFormer shift supervisor at Don Dale questioned on use of force
Next articleHow did a ‘loose cannon’ get his youth worker job back?