Former shift supervisor at Don Dale questioned on use of force 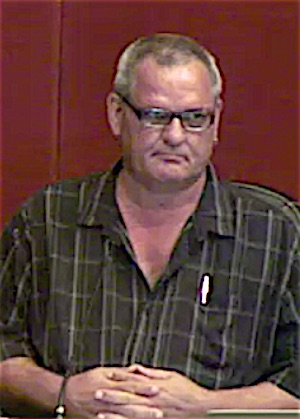 Late in his evidence to the Royal Commission former juvenile detainee Jamal Turner described a youth justice officer lifting other detainees off the ground with a manoeuvre he called “a wedgie”: it involved the officer pulling up “the jocks” of the detainee “to the back of his head”.

He said he saw this four to five times: “I thought it was normal.”

Was it a particular officer who did this? Yes, he said, he knew him by the nickname “Yogi”, describing him as “a big fella” with grey hair.

“Yogi” was next in the stand. Trevor Hansen (pictured), employed by NT Correctional Services from 1994 to 2014, eventually moving into shift supervisor position, agreed that was his nickname.

He didn’t care for the term “wedgie”. He called it rather a “one man escort”, then correcting himself: a “one person escort”. It involved holding the detainee’s shorts with one arm, their shirt at shoulder level with the other and “guiding” them forward.

He denied that the action would lift the detainee up, as it was all about moving them forward. If the shorts rose up “a little bit”, that was only “what was required” to move the detainee forward.

If he used the action, he would enter it in the “Use of Force Register”, saying “held by shorts”.

He was being questioned by Counsel Assisting, Peter Callaghan SC, who suggested making the entry in that register  meant that it involved force.

He had earlier questioned him on use of force in actions involving two 15 year old female detainees.

Mr Hansen had told the commission that he began his job, as junior justice officer, without training of any kind. Later he was trained in First Aid and in “cell insertion, cell extraction”.

“Years later” he undertook PART – “professional assault response training”, which was a two-day course, with refreshers every two years, in techniques to move detainees from A to B without hurting them and without being hurt.

In the first incident involving a young female detainee, she was misbehaving, by being verbally abusive, “abusing property” (which he agreed meant “trying to damage” property) and not following directions. He escorted her to the security unit.

Once there, part of the procedure was to remove her outer garments. Mr Hansen was in the company of another officer, a woman.

Where was this procedure written down? he was asked. In the “at risk procedure manual”. Its logic was not to give the detainee the chance to hang themselves or otherwise hurt themselves.

Mr Hansen said that when this particular girl was asked to remove her clothing herself, he “offered to back away”, she was abusive, he asked her again, counted to three verbally and on his fingers, then walked in and restrained her while her clothing was removed by the female officer.

The restraint involved putting her first in an “arm lock”, while her shorts were removed, then in a “leg lock” while her t-shirt was removed. During this time the girl was being held down on the cement bed in the cell.

Mr Callaghan asked whether there were any guidelines about young girls being undressed by men, was it ever suggested by management that it was “inappropriate”.

Mr Hansen answered by saying it would depend on whether there were enough female officers rostered to allow it to be done by them, and repeated that “it was procedure”.

The young girl was clearly agitated, was she not? “She was agitated before and after.”

Would the procedure have increased her agitation. “Probably, yes.”

Was anything done to lower her agitation? Yes, he organised an officer to take an “at risk gown” to the girl.

Anything else? “Not at that stage.”

In the other incident, involving a 15 year old girl not following directions and physically resisting being pushed into her cell, there were records of injuries she sustained. Mr Hansen disagreed with the description in the records of his actions as being for “no appropriate reason”. The reason was that she was being “disobedient”.

She made a written complaint and as a result his actions were investigated internally. He was unaware if the police were ever involved in investigating the incident.

He described the situation as “a messy way” of putting her inside the cell: “It made me look at myself.”

Once again he had used a leg lock to restrain this girl. Again he was asked if anyone had ever taken issue with using such a manoeuvre on a 15 year old girl. No, he said.