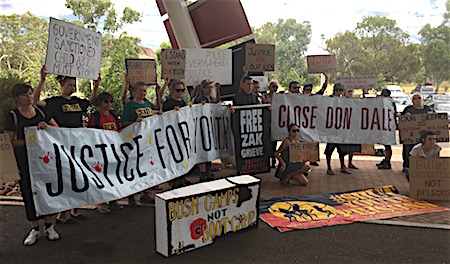 Dylan Voller today answered “no comment” to a question from the Alice Springs News Online whether he had drawn up a kill list.

National media have reported that a hand-written list, allegedly written by Mr Voller and submitted to the Royal Commission into the Protection and Detention of Children in the Northern Territory, had been leaked.

The list shown had six names on it. According to the Australian Newspaper, the list was entitled “People to Kill”, and the piece of paper includes “run him over”, “slice his throat” and “stab him in the neck” as ways to allegedly bring about the deaths of the people named.

“Drop a 50kg weight on his head” and “stab him with a pencil” are also mentioned, says the Australian.

At noon today Mr Voller (in the centre of the photo above) took part in a demonstration of about 20 people, including his mother, in Alice Springs where the commission is sitting for three days.

Briefly speaking to media he said he was at the protest to support the other young people giving evidence “because everyone around the country and the world is supporting me. So it’s my turn to give back while I’ve got an open voice.”

He said he is “going good” at Bushmob, a diversionary program for young people in conflict with the law.