Home Issue 2 Choked, kicked, but no complaint ever responded to
Issue 2Volume 24

Choked, kicked, but no complaint ever responded to 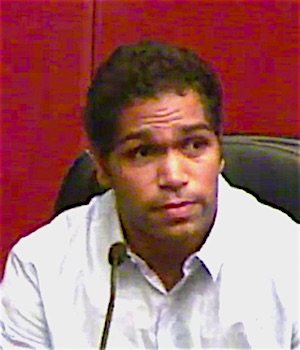 “I got along good with most of them,” Jamal Turner (left) said of the youth justice officers he encountered as a young teenager in Aranda House and later at the Alice Springs Juvenile Detention Centre near the gaol.

But there were times when the opposite was the case. He described officers snapping, swearing, getting physically rough. This included being “grabbed by the throat” and held in a chokehold, being “kicked in the arse” by an officer wearing boots.

He described having complained on many occasions, but never having his complaints responded to.

Mr Turner, aged 20, was giving evidence to the Royal Commission into the Protection and Detention of Children in the Northern Territory, holding public hearings this week in Alice Springs. As an adult he chose to give evidence in open session.

His first entered detention at age 13. As he remembers it, it was for stealing a bike. He was taken to Aranda House, where he says he spent two to to three months on remand, waiting for a flight to Darwin (presumably to be taken to Don Dale).

At that time he began the Bush Mob program but lasted only two days. He said he felt “uncomfortable” there as  he was used to sleeping in his own bed, with his family. He jumped the fence and ran away – something he regrets to this day. Had he stayed there, completed the program, it might have been a first step towards getting a job, getting onto a “good path”.

He’d been on such a path, growing up in Alice Springs and later Perth. He’d gone to primary school, high school, played lots of sport until he and his cousins started doing drugs and getting locked up.

He likened Aranda House to a “maximum security” prison. The windows were painted over so that there was no natural light in the cells; the small exercise yard was covered with shade cloth, so the detainees were never in the direct sun. There was only microwaved food to eat, no fresh food. After a couple of weeks on that diet he had started to feel “quite sick”.

He described an incident when he was being escorted, in handcuffs, back into Aranda House. It was the second or third time he’d been there: “I was quite used to the place.”

In the caged area, just inside the sally port, he saw a dog he knew from previous stints. It apparently belonged to one of the officers and it had been Mr Turner’s job to feed it.

He moved to try and pat the dog. The escorting officer apparently thought he was going to escape. He grabbed him by the throat, with both hands, had him up against the wall, in a chokehold. Mr Turner was 14 at this time.

The officer who allegedly did this was Derek Tasker. Counsel Assisting the Commission, Tony McAvoy SC, put Mr Tasker’s version of events to Mr Turner: “He says you kicked the dog.”

Mr Turner rejected this: he went to pat the dog, he wouldn’t kick the dog.

He was asked whether this was the only time Mr Tasker was rough with him and the others boys.

In reply, Mr Turner didn’t describe a specific incident but spoke of guards being rough in their restraint of juveniles, boys of 13, 14, weighing 40 to 50 kilos: they would have them handcuffed on the ground, with their knee in the juvenile’s back, putting all their weight on him, using “too much force”.

“I’ve been assaulted a couple of times,” he told the Commission, “but not as much as other people.”

What sort of thing would lead to this happening? asked Commissioner Mick Gooda.

“Just being kids, doing what kids do, have fun,” said Mr Turner. 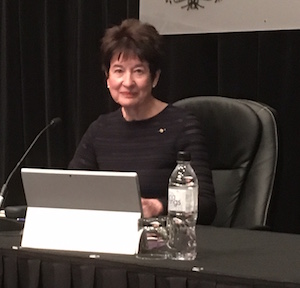 Asked by Commissioner Margaret White (left) to be more specific, he described coming back in from playing footy or basketball in high spirits, “yelling around”: the guards would start to “find it hard to do their job”, “they couldn’t cope with us”.

Mr Turner told the Official Visitor about his experience, he saw her write it down, but there was never any follow-up . He kept complaining, including to his lawyer at CAALAS, and to the Ombudsman, but when it felt like it was never going to get anywhere, he gave up. All they would say was , “I’ll get back to you”, but they never did.

Commissioner White asked him whether any complaint he’d made had ever been followed up. “Not really, not one.”

He later described an officer at the  Alice Springs Juvenile Detention Centre (JDC): he was somebody who had “no patience with kids”, he had a “short fuse”, he’d start “snapping, swearing for no reason”, he had “mood swings”.

“He kicked me up the arse a couple of times,” said Mr Turner. (This officer’s name was not mentioned.)

He described an incident when he went to the kitchen at the time when detainees were usually allowed a snack – muesli bars, fruit. Mr Turner wanted an apple. The officer said he had to wait till later. Mr Turner just grabbed the fruit anyway and walked out, when he felt the guard’s “boot or whatever” on his backside and in his back.

He couldn’t describe how painful it was, he was shocked, but it hurt.

Was it a light kick? asked Commssioner Gooda.

“He had boots on, he kicked me up the arse with boots”.

Mr McAvoy asked what Mr Turner thought of the way these events were described in the officer’s “incident report”.

Mr Turner said the officer got most of it right, except that “definitely he assaulted me”.

Once gain, he made a complaint but the officer he complained to never got back to him.

He went on to describe another incident at the JDC, involving him and his cousins. They’d been kicking a ball around and came into the recreation room. He was the last of them to take a seat, when he heard one of the officers and one of his cousins swearing at each other.

He said the officer challenged the cousin to come to the toilet area, where “I’ll kick your fucking head in.”

The cousin called on his “big brother” (Mr Turner) to intervene.

Mr Turner challenged the officer: why was he being so rough, they were only little kids.

He was asked whether he wanted to go to the toilets and have his “fucking head kicked in”.

The officer tackled him to the ground. The other kids all stood up, grabbed their chairs ready to hit the officer. Mr Turner said he told them to leave it, not to worry about it.

Mr McAvoy asked him what the significance of going to the toilets would have been?

There were no cameras there, said Mr Turner, so in that situation it would come down “to a fight, from my point of view”. No-one would see it. There’d be no witnesses.