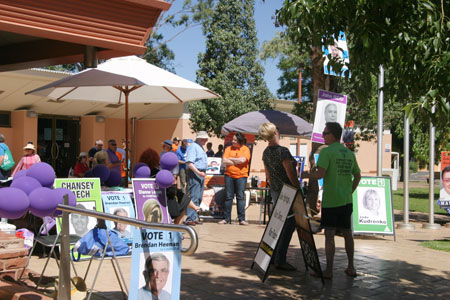 Councillors, led by Mayor Damien Ryan and Cr Jade Kudrenko, have rejected savings measures proposed for the next local government election in August.

Right: The central polling place at the Andy McNeill Room is not in doubt. Not so two  furthest from the town centre. Photo from our archives.

Director of Corporate and Community Services, Skye Price, had recommended the deletion of polling sites south of the Gap (at Yirara College) and Larapinta (at Living waters School) to save a some $6000 – $7000.

She had also suggested dropping a personalised mail-out of electoral information, saving around $10,000.

Her report described the “social impacts” of these decisions as “nil”, an assessment questioned by Cr Kudrenko.

On the mail-out, Mayor Ryan wanted to be sure that every voter was reached, especially with the message that they must number every box on the ballot paper in order to make a formal vote.

He was concerned about possible confusion over this because in the last NT Legislative Assembly election it was possible to vote with only your Number One choice.

Ms Price’s suggestion that “myriad” alternative promotional strategies – presence at the Show, the Post Office, social media, email – could get this message across failed to convince. Cr Kudrenko said the issue needed to be considered in the context of an effective communications strategy, not as a savings measure. The mail-out would use addresses on the electoral roll and was the best way to make sure of reaching “every possible voter”.

On the reduction of polling sites, Ms Price based the choice of Yirara and Larapinta on low voter turnout at both sites during the 2016 NT election – 320 and 531 respectively. The next lowest was at Braitling with 829.

Cr Kudrenko wanted to understand there was a correlation between the low numbers at those sites and the overall low voter turnout for local government elections. If so, council should be making more effort to support the opportunity to vote, not less.

Ms Price suggested that most people from rural properties (town camps were not mentioned) were coming into town for work and could vote at the pre-polling sites. Cr Eli Melky also couldn’t see the issue: surely it was just a matter of a short car trip (assuming universal access to cars).

Above: The NT Electoral Commission makes a big effort to provide the opportunity to vote. In the 2012 Legislative Assembly election a pre-polling place was set up at Karnte town camp south of the Gap.  On election day these voters might otherwise have gone to the polling place at nearby Yirara College.

Cr Kudrenko was insistent: she would be uncomfortable without firm supporting information to drop any polling sites. She said council already had the money set aside (in fact more than enough) to ensure a “good democratic process” in the conduct of the election.

Councillors generally agreed that they needed to understand more about the uptake of pre-poll voting. Cr Steve Brown suggested it may have been up to 60% in the 2016 NT election. They voted to defer the issue, with only Mayor Ryan and Cr Kundrenko voting against.

The NT Electoral Commission quote for the conduct of the election was $187,866. The final cost comes out of council funds. It has $220,000 for the purpose in its cash reserves.

Despite compulsory voting with an infringement penalty of $50, council has previously resolved not to pursue non-voters.

Mayor Ryan, Deputy Mayor Jamie de Brenni and Cr Kudrenko will represent council at the public hearing next Monday by the Scientific Inquiry into Hydraulic Fracturing in the NT.

Mayor Ryan stressed the importance of making known council’s concern about the safety of the town’s water.

Other concerns he mentioned included the influx of mining workers in the community, and “the sludge” left behind after fracking wells have been sunk – will council be expected to accept it at the landfill, one of the few in the region? 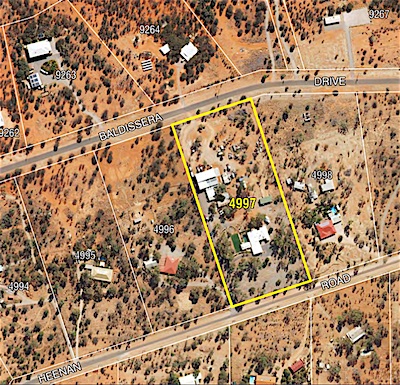 Council is considering making an objection to an exceptional development permit application due to come before the Development Consent Authority.

The applicants, Nick and Lyn Absalom, say in their application that they bought the property (outlined in yellow at left), zoned Rural Living, between Baldissera and Heenan Roads, 11 years ago and have been using it “without incident” ever since to store and conduct maintenance on up to seven prime movers.

This is the purpose for which they  are now seeking re-zoning.

They claim that when land in town they were leasing for their business became unavailable, they could not find an alternative: “There was not, and is not suitable land available for us to operate the business within the Alice Springs Township at this point in time.”

Although they says that “in general” people in the area have not been concerned, similar applications in the past have encountered vigorous opposition from residents.

Council heard from local resident Dawn Jacko on the issue at the start of last night’s meeting. She certainly was concerned, saying that if approved it would “change the nature of the area forever”.

She also argued that there would be an impact for council if commercial activities were allowed outside a commercial zoning, and complained of the applicant’s vehicles parking on the verge which limited access to her property’s driveway.

Cr Kudrenko, who sits on the DCA, suggested that, if approved, the development would set a precedent and as such could impact more broadly on the town.


The issue will be discussed at the next meeting of council’s Development Committee, first thing Monday morning.