Centralian Citizen of the Year 'sells the message' on Alice 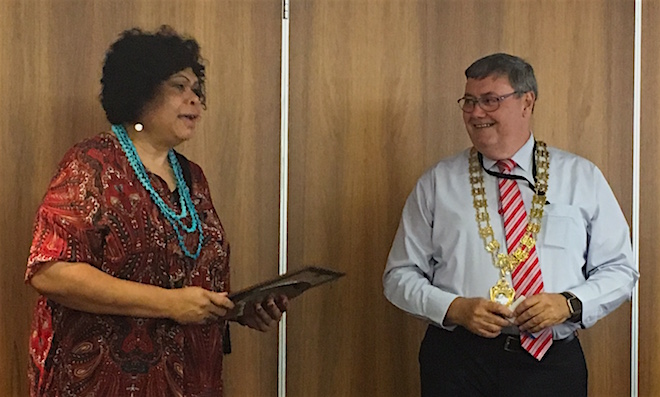 Above: Andrea Mason receiving her award in the Town Council chambers from Mayor Damien Ryan.


She was speaking at last night’s Town Council meeting, where she was presented with the perpetual trophy that accompanies the award, announced on Australia Day. She hadn’t been able to be at the local ceremony because she was also a finalist in the Australian of the Year Awards, held  in Canberra.

“Alice Springs has been an incredible community for me the last eight years,” she said, “a place where my parents have lived, where a lot of my family live, but it’s also a place now where my friends live.

“It’s an absolute pleasure for me to talk about Central Australia and the community of Alice Springs when I do travel and have contact with people interstate. It’s a very easy conversation to have …

“I think it’s fantastic. Every young Australian who comes to work for my organisation – I do meet with every new staff member and I just tell them how much reward they’re going to be seeing years ahead about making the decision to live here.

“I’m also ambassador for Tourism NT so I’ll be absolutely continuing to sell the message.”

It was an upbeat start to the first council meeting of the year, ahead of a sobering overview on the law and order challenges of the summer from Commander Danny Bacon.

Although police had seen more young people getting involved in crime, he warned against a general suspicion of youth.

Councillors Jade Kudrenko and Eli Melky agreed, challenging the generalised statements by the manager of the Ranger Unit in his report to council on the Youth Patrol. This is the name for an after-hours service operated by council in partnership with Central Australian Aboriginal Congress and funded by the NT Government. It provides “assessment, transport and referral for young people at risk”.

In December the service provided 1137 bus rides. Apart from these numbers, the Ranger Unit reported that “The youth are becoming more aggressive and there has been a number of assaults reported to police.

“The threats against the Youth Patrol Staff are on the rise.”

Cr Kudrenko said this was “painting all youth with the same brush” and wants to see that wording amended, as “this is for our public and historic record”.

She also wanted to know how the risk to staff is being managed: “What strategies are in place?”

Cr Melky agreed with her concerns, suggesting that the generalised statement could be “inflammatory”. He wanted to know more about the nature of the “threats” to staff.

These questions were taken on notice.

Meanwhile, discussions are underway with the NT Government for funding to continue to operate the Youth Patrol, with a contract expected to be finalised at the end of February.

Both councillors also asked for a more “professionalised” report on the activities of the recently appointed Indigenous Liaison Officer, who was referred to by first name, no surname – instead of simply by his position – and described as having been “very active” – “insufficient” information, said Cr Kudrenko. 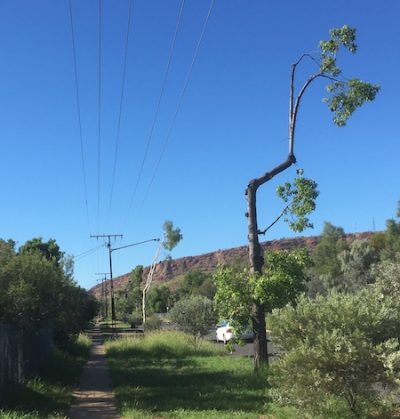 Acting Director of Technical Services Harry Seccombe admitted that the mowing of verges around town, after the intensely wet summer, was “behind the eight ball” as “we don’t have the resources”.

Cr Brendan Heenan asked whether extra crew could be hired.

Mayor Damien Ryan said they would look at that “if people come to us”. Sporting grounds and school verges are being prioritised at the moment.

Cr Eli Melky asked if residents could not mow their own verges.

Mayor Ryan said council does not discourage anyone from doing so, many residents do and council welcomes it.

Cr Steve Brown said council should look at replacing the “quite ludicrous creatures” made of street trees after lopping by Power and Water (example above, in Memorial Avenue). He said council should take a “very hard look” at what type of trees to replace them with.

Mr Seccombe welcomed the idea as “excellent”, commenting that every council he has ever worked for has had this same problem with the electricity authority: “They do not seem to care about the problem they leave behind for us.”

• Councillors generally were supportive of a scheme presented by Technical Services for installing speed humps in five locations (“the absolute minimum”, said Mr Seccombe) on Woods Terrace. By choosing locations with existing street lighting, the costs have been contained to $130,000.

Mayor Ryan urged that council find the money to do the works, rather than make an application for Black Spot funding.

Public consultation on the endorsed plans will now go ahead.

Council’s ‘nest egg’ is growing nicely. To date this financial year it has earned more than half a million dollars in interest, made up of bank interest, interest on short-term investments ($34m worth) and on rates.

A mid-year budget review will be undertaken in February.