Bogged meters off highway and AANT doesn't lift a finger 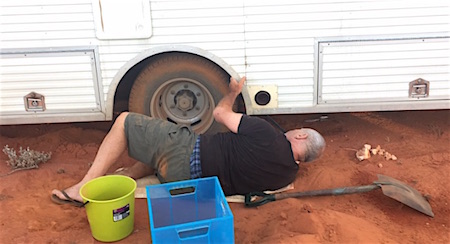 Like thousands of Alice locals you might be using the South Stuart Highway to catch up with family over the festive season.

Just to be sure of having competent backup in case of motoring troubles, you not only become a member of the Automobile Association of the NT – you get Premium Cover.

And on your drive over some 1500 kilometres (destination Adelaide) you might pull off the the sealed highway, to take a break or even overnight. There are some though relatively few and mostly small dedicated rest areas but there are also plenty of dirt tracks.

You take one that looks well used and drive along it for maybe 100 metres. It’s a smooth, firm dirt road. Judging by wheel tracks, the remains of campfires and so on, the spot had been used by plenty of others.

You hit a soft spot on the edge of the road, rear wheels spin in powdery sand, you’re bogged! The following might go through your mind:

You’re not far north of Glendambo – will the mobile work?

One bar of signal– yes, it does work! In case you lose the connection you ring a trusted person and give him the main details: Precise location, we’re bogged, not very seriously, a 4WD could pull us out.

This is to avoid talking to an AANT operator with lots of questions before you can communicate the main details. Trusted person will take charge.

All good. You crack a coldie. You’ve been an AANT member since 1993, you’ve hardly ever used the service. Enjoying the sunset you contemplate the AANT Spiel: “Established in 1963, AANT continues its proud history of serving the needs of over 20,000 members, delivering roadside assistance” and so on.

She’ll be right. AANT is the motoring club of the bush. Of course they will have a comprehensive list of assets and resources along the highway most travelled by Territorians.

Glendambo, with a couple of roadhouses is just down the road, 46 klicks.

Surely there is someone on the AANT list with a 4WD. No worries. After all “towing country” up to 200 km is in the cover. No specialised towing equipment is needed. 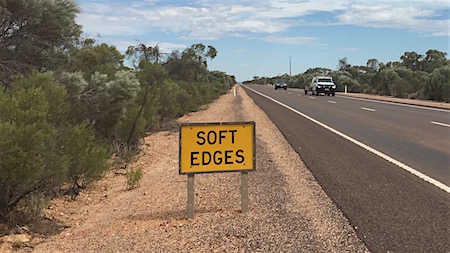 You couldn’t be more wrong.

You get a call not from the AANT but its SA counterpart, a woman who displayed no local knowledge nor particular interest in our situation.

After the initial interrogation comes this: Getting bogged is not covered. They will arrange retrieval but you have to pay for it. But you’re a Premium member! Too bad.

She explained that getting bogged is an accident not a break-down.

How much will it cost? The woman can’t say. Trusted person, you find found out later when you get into good phone range, has been told it could be in the order of $2000.

The following day you received a “courtesy call” from AANT Premium. You tell her their roadside “assistance” is a disgrace! We were certainly by the roadside and we certainly needed assistance.

Ever seen a sign saying “soft edges”? If you get bogged there expect nothing from AANT.

Most rest stops along the Stuart Highway are dirt and will be boggy after rain. All your Premium AANT card will be good for then apparently is putting it under a wheel for traction.

But it ended with a real Christmas twist – no thanks to AANT.

Next day, after three hours trying to dig out my somewhat large RV, using car jack and stones packed under the drive wheels, I decided I definitely needed help.

“What’s the trouble, mate? No worries, I get you out.” 4WD ute. Toolbox. Snatch rope. Big smile above his singlet, stubbies and tats.

Ten minutes later we were mobile. “Have a good one.”

Off he went, having just given a total stranger a Christmas present he’ll never forget.

PHOTOS: Digging didn’t work, AANT Premium turned its back on us but good Samaritan got us mobile again • Soft edges? Don’t get stuck – you won’t get help from your motoring association.

We asked AANT for a response and received the following email from the head of the association, Edon Bell:

AANT attends to more than 18,000 calls for roadside assistance Territory wide each year and which all phone calls for service are recorded; to qualify your story an opportunity to investigate the actual details will firstly be appreciated.

[ED – The report described in this story was made by our “trusted person” in the Northern Territory, giving my name, membership number and precise location of the vehicle.]

Our terms and conditions state that AANT is a vehicle breakdown service aimed at providing you with assistance in the event of an unexpected mechanical or electrical fault / failure of a vehicle and / or towed unit. It is worth noting that AANT is not an “emergency” service provider, that is the role of SES, police, fire etc.

The service exclusions also clearly state [there is no] service to and recovery of vehicles, caravans and trailers on non-improved public roads or land not trafficable by a conventional 2WD vehicles, nor for towing or recovery of bogged vehicles.

When calling the 13 11 11 national number for assistance, the call is directed to the call centre relative to that state. When ringing for road service there are a standardised set of questions that a consultant needs to complete in order to qualify access to service.