Local palliative care lobby gets its way after long campaign

“Hang on, this is our show”: That’s what (from left) Minister Dale Wakefield, Mayor Damien Ryan and Chief Minister Michael Gunner seem to be saying at the site for the palliative care hospice yesterday, as Sandra Clyne, Lesley Reilly and Mary Miles are overjoyed with the success of their long campaign for the facility.

A media opportunity with government VIPs in the foreground yesterday turned into a celebration for three women heading up a 22 year long battle for specialist palliative care services in Central Australia.

It was the Chief Minister applauding Sandra Clyne, Lesley Reilly and Mary Miles, of the NT Hospice and Palliative Care Association, when he visited the construction site of a 10 bed hospice yesterday.

It is jointly funded by the Commonwealth ($5.3m) and Northern Territory Government ($1m).

Located at the rear of the hospital, it will provide a home-like environment, with bedrooms leading to outdoor courtyards and a large communal lounge area and meeting rooms.

The national association, which now has 15 local members, more than two decades ago managed to have the government appoint a single nurse, and a doctor for one day a week, to provide specialist services for the dying. 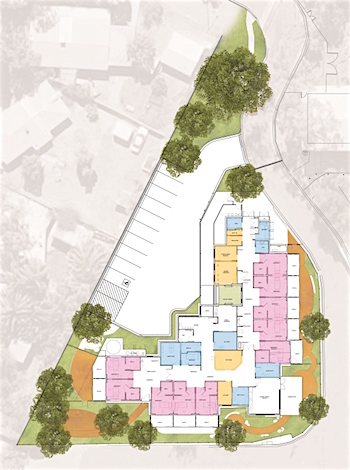 The services grew over the years and MLA for Araluen Robyn Lambley secured funding for the hospice when she was the Giles Government’s Health Minister.

The funds were threatened to be diverted to a multi-purpose centre, mixing palliative care patients with long-stay rehabilitation or elderly patients awaiting nursing home placement.

The association swung into top gear, lobbying the Government and the Opposition Leader at the time, Michael Gunner, who made the issue part of his election platform.

Yesterday he made good on his promise.

Ms Miles says the facility’s services will range from symptom control to end of life care, and will be run entirely from the new building. At present, part of the service is accommodated in an office in the Mall.