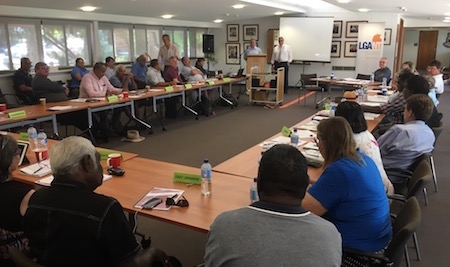 Apart from getting some applause for minor increases in funding Minister Gerry McCarthy got a cool reception from delegates to the AGM of the Local Government Association (LGANT) in Alice Springs this morning.

Katherine Mayor Fay Miller told him the government’s failure to have a department of local government was a “slap in the face”.

Mr McCarthy did his best to convince the meeting that under his portfolios, Housing and Community Development, he could do the right thing by councils, and to chop a department was a move to cut red tape  and save the taxpayer money.

Nevertheless LGANT president, Alice Springs Mayor Damien Ryan, announced Mr McCarthy would be getting a “we are not amused” letter on the subject.

Barkly Mayor Barbara Shaw countered that local government is not just some program like housing and needs to be afforded the respect and influence appropriate to the third tier of government.

Mr McCarthy referred to the poor results of SIHIP and suggested housing needs to be looked at over 10 or more years. Issues of tenancy management and repairs will need to be improved, he said, as does housing for non-local recruits in the bush.

The government would ensure these solutions would be “place based” and not following a one size fits all principle.

“New ideas are welcome,” he told the meeting.

Mr McCarthy replied that as a politician he finds it risky to comment on such matters, but he professed that he saw some need for “equity”.

He announced an annual $2m increase to local government operational funding for the nine regional and three shire councils.

There will be an additional $5m for the Strategic Local Government Infrastructure Fund starting in 2017-18.

“Consultation with stakeholders has commenced,” he announced.

While he’s at it Mr McCarthy should get some hints on how to deal with media requests to a Minister supposedly pledged to transparency, and how to organise a simple interview.

The Alice Springs News Online was seeking his views on apparent moves by three bush communities to get some distance from local government, taking care of tasks usually performed by it, and securing income usually flowing to it.

The communities are the Top End’s Gunyangarra, which has just been granted a lease over its entire area, as well as Amoonguna, adjacent to Alice Springs, and Utopia, to the north-east of it, which are seeking leases.

(These issues were not raised during the two-day AGM, according to Mayor Ryan.)

Mr McCarthy was in a chatty mood after his speech this morning, schmoozing with delegates during a break, and observing from the sidelines as the AGM took its course.

The News asked one of the Minister’s minders if we could have a five minute interview, and what would be a good time. The minder suggested 1:15pm.

A little while later I re-introduced myself to Mr McCarthy, who had been a source for political stories over many years, and I mentioned the interview appointment.

The Minister was aghast: I had spoken to the wrong minder (who was sitting right next to us). Protocol required that I speak to another minder.

She was 1600 kms away in Darwin. I rang her and it turned out it was her day off but she tried to absorb the nature of my enquiry so that she could pass it on to her boss.

Half an hour later she rang back and advised she has checked the diary of the Minister (who was still in the same room as I was, chatting away) and that he is very busy but I could try next week.

I declined, wondering if the Territory’s councils were not lucky after all to not have Mr McCarthy as the Minister for Local Government.