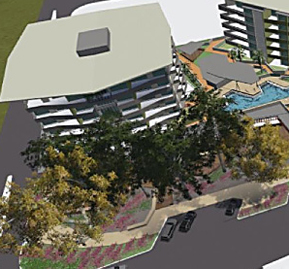 Three sacred trees on the Melanka block are at risk from car parking traffic and lack of irrigation, according to local gardening expert Geoff Miers.

Four large gumtrees, not including any of the sacred ones, have already died.

Developers planning a $100m hotel and residential complex on the land had to design the buildings around the sacred trees (drawing above right) which now appear to be neglected.

We have not been able to obtain comment from the Aboriginal Areas Protection Authority but will publish it if and when one is provided.

Mr Miers, when asked to comment, said the compaction of the ground by parking cars is likely to “contribute to the detriment” of the trees.

The ground used to be irrigated periodically, but has not been for some time. 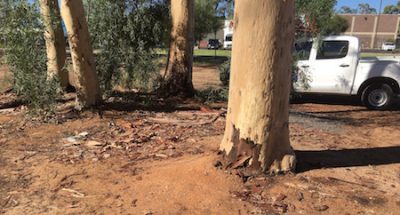 He says the ground should be mulched and barriers placed “around the tree protection zone that surrounds each tree”. This zone roughly corresponds with “the canopy line”.

The block, until recently the site of a planned eight-storey development, is now on the market again.

The  News has asked the selling agent to notify the owner that we are seeking comment, and the agent agreed to pass on that message.