Over the last month children aged eight to 10 have been involved in four break-ins at Yuendumu, the Warlpiri community north-west of Alice Springs, visited last week by the Royal Commission into Child Protection and Youth Detention in the Northern Territory.

Elders at a public meeting with the Royal Commission spoke of the difficulty in controlling children, when parents are no longer allowed, under white law, to discipline them physically.

The series of break-ins have been confirmed by police.

A worker in the community – a reliable source speaking on condition of not being named – told the Alice Springs News Online that the premises broken into were those of non-government organisations (NGOs). The break-ins occurred mostly at night, with the children nimble at evading police and night patrol.

Although offices were surrounded with fences, the children managed to climb over them or dig underneath. Once inside they smashed windows, damaged cars, and in one office, says the worker, they set light to files. 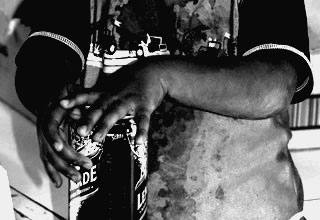 According to Central Desert Division Superintendent Neil Hayes, both commercial and residential buildings were targeted, with unspecified “damage” caused in one incident. In other incidents the children took small items, including food.

A number of offenders, all youth aged eight to 10,  have been identified, says Supt Hayes, while other matters remain under investigation.

“Given their ages, no formal prosecutions have been commenced. There has been strong engagement between the police, victims, youths and their families.

“NT Police are part of a multi-agency response to divert young offenders away from these actions in the future,” says Supt Hayes.

Among those agencies is the Yuendumu Mediation and Justice Committee. Its coordinator, Rhys Aconley-Jones, says in a two-hour meeting the children involved, all boys, resisted engaging with the process, leaving parents and stakeholders frustrated.

But the response won’t stop there. WYDAC (Warlpiri Youth Development Aboriginal Corporation) will continue to work with the children, trying to get them to think about what they’ve done and its impact, as well as getting them involved in more constructive activities, such as hunting or learning new skills.

The Alice News also questioned Supt Hayes about illicit drugs in the community. Elders expressed their concern about this to the Royal Commission, suggesting that the drugs are being brought in by outsiders and include Ice.

Supt Hayes says police receive information from time to time suggesting drugs are being brought into the community and have previously charged local residents in relation to drug matters.

He says they receive “anecdotal information” about drug use but to date have only been advised about or detected cannabis and alcohol.