The Greens Senator and that four-letter-word: Work. 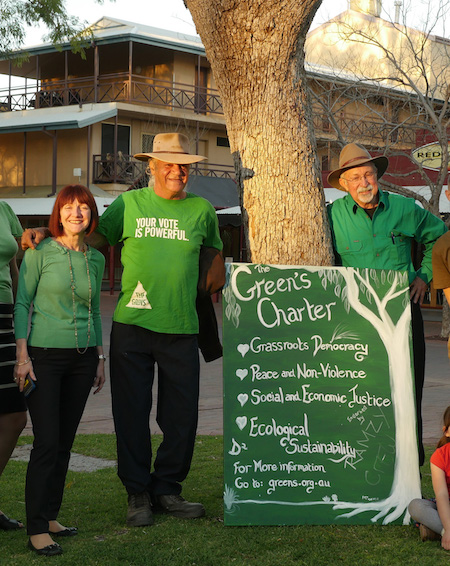 The objective of the interview was to elicit from Senator Rachel Siewert what the Greens would contribute to extracting Aboriginal people from passive welfare and its horrendous consequences: Should they become part of the broad community by engaging in production of goods and services that have a market value?

The answer, in a nutshell, was they couldn’t, they wouldn’t and they needn’t.

During a 90 minute conversation Senator Siewert offered not a single researched, reviewed and costed proposal despite – as we pointed out – the clear and ample opportunities for Aboriginal people: They have freehold ownership of half the Territory, not far off a million square kilometers. Any part of it can be leased for 99 years. In some areas there is plenty of water. Thousands of work age people are idle. Dozens of rail and road trucks a day are travelling south empty and could carry produce to Adelaide. A million camels roam the Outback.

In addition to the original land granted under land rights, about a dozen cattle stations have been bought up by Aboriginal interests and converted to Aboriginal freehold, but most are leased to neighbouring non-Indigenous cattlemen and few Aboriginal people work on them.

The potential of the tourist industry is without discernible limit, offering potential for countless small-scale enterprises, as well as big ones: The Ayers Rock Resort is Aboriginal owned yet hardly any local Aborigines are working there.

Yet with jobless figures in the bush at constant crisis levels, in the pathetically small agricultural industry in this vast country the grapes are being pruned and picked picked by Asians from the Riverland and melons by foreign backpackers.

Far from experiencing an OMG moment, the Senator presented textbook arguments that nothing could nor should nor would be changed. She spoke to the News in the company of Greens candidate for Braitling, Dalton Dupuy.

She said: “We are imposing outside views about how people should be employed and I don’t think that fits in with Aboriginal culture and excludes their own decision making processes.

“We’re talking about seasonal work. That’s not permanent long term employment. Perhaps these are not the jobs people are looking for.

“You do see a lot of engagement in rangers programs in WA. I spent a lot of time with rangers on country. I’ve seen measurable health outcomes. It links into the important cultural and spiritual aspects of the connection to country. Young people are being mentored.”

Senator Siewert says some of the rangers find jobs in the mining industry.

NEWS: How many rangers do you think we need in Central Australia?

NEWS: How much training does it take to prune grapevines or pick pumpkins?

SIEWERT: You are getting down into the minutiae rather than looking at what’s going on in that person’s life that prevents them from being able to enter employment.

NEWS: What, for example?

SIEWERT: In WA tourists and backpackers are doing the seasonal work. If you are a resident that sort of work does not provide you with long term, meaningful work.

NEWS: It’s long term in the sense that it needs to be done at pretty well the same time each year. It’s better than nothing.

In response Senator Siewert gives the example of a woman over 55, “suffering from age discrimination,” gaining temporary employment for two or three months. For a time she is over the limit for liquid assets and has to wait until she has virtually no savings before being able to get back on Newstart. She is in the wrong stream for getting help to update her IT skills because she is in intermittent employment. She is going backwards.

DUPUY (drawing parallels with socialisation of white people, including the British people turning people into “industrial fodder”): Which is more meaningful work, to be an old woman sitting under a tree, dreaming this country, or singing this country, or someone sitting in an office in Sydney? Both are in legitimate work defined by their own cultures.

NEWS: Sooner or later the Australian taxpayer is going to say that people have been sitting under a tree long enough, receiving welfare payments. If there is work they will expect them to take it.

SIEWERT: There are not enough jobs.

NEWS: We began this conversation with an outline of jobs and opportunities that are available.

NEWS: There is full-time work at Ayers Rock Resort.

SIEWERT: What you are saying is we should be condemning a certain group of people in temporary, casual work. They can never buy a home because they can never save enough.

NEWS: How can it be changed? The Greens are likely to have a significant say in the nation and NT Parliaments.

NEWS: Would this provide an adequate income, no matter what you do?

SIEWERT: Yes. We are entering into a very different employment world.

Senator Siewert says about 20% of the workforce will find it hard to get better than part-time employment, and the party will continue to develop GAI “or any better system”.

NEWS: Where will the money come from? You are saying from carbon tax …

SIEWERT: You are getting into a whole lot of complex areas I don’t think we need to go into during this interview. We had a system to price carbon which this government tossed out. They finished up charging industry less than they should have.

Senator Siewert points to the Greens’ website for details but it, too, is not specific on funding a GAI scheme which she says is also called Universal Basic Income: “Reform of the income support system to ensure a guaranteed adequate income for all, including simplification of pensions and allowances into a universal guaranteed adequate income (GAI) scheme,” says the website.

NEWS: There are nearly 600 people in the Alice Springs prison which is surrounded by potential agricultural land.

SIEWERT: Are you suggesting we put our press labour gangs?

NEWS: Is that what you would call them?

SIEWERT: If you force people to work in that sort of environment, yes!

DUPUY: How do you differentiate between a pressgang and a rehabilitation program?

SIEWERT: It depends on the way you are developing it. If you are not consulting people and ask them what they want to do, and look at how it fits into an overall program, and you are going to say, you are doing this for eight hours because you are being punished. That’s not OK.

SIEWERT: If you are working with people, and developing up their skills as part of a training program, looking at where it can finish in the future, putting in some therapy as well, then it’s a rehabilitation program. Around Australia people don’t want to engage in [seasonal] work. That’s why we have 457 visas.

NEWS: Is the key in whether they accept it or not?

SIEWERT: You’ve opened up another area around the way people make decisions and about including people in decision making. No-one likes to be told what to do. That’s the difference, for example, between forced income management and voluntary income management. If people genuinely have ownership they are more likely to participate and to own the outcomes, own the program. You don’t force things on people … that’s why the Intervention isn’t working.

NEWS: There seem to be two models: One is to expect people on the dole to accept a job when it is offered, and the other, to give people the option to reject the job and keep the dole.

SIEWERT: [The first option] is already in place. We’re talking about a flawed process in the first place because it’s not meeting people’s needs. Most people don’t want to do nothing. They want to engage. They want a quality life. So how do we then move from where we are to ensuring people have the skills, motivation and support, addressing the underlying barriers, to make sure they can participate in their choice of fields? We are not doing that at the moment.

NEWS: What are the barriers?

SIEWERT: I don’t know. I haven’t been out to talk to them. From my experience in other places it might be not being work ready, not being trained properly in the nature of the work, having other barriers to engagement.

DUPUY: Being on time, being able to follow instructions in English, there are all kinds of barriers. [In an Aboriginal traditional setting] it’s not a nine to five, five days a week routine. There are people socialised in another way.

SIEWERT: Going to work nine to five is not normalised in some cultures.

NEWS: The great majority of people in Alice Springs would have a problem with accepting that as a reason for paying the dole.

SIEWERT: Do they actually talk to Aboriginal communities about that?

NEWS: Most would not.

SIEWERT: So they come with their own pre-conceived ideas without even bothering to talk with Aboriginal communities?

NEWS: The majority in Alice Springs would take the view that a lot of effort has been made in the past four decades to support Aboriginal people.

SIEWERT: I can talk all afternoon about the failure of the school system, the health system.

NEWS: Where does self-help come into the picture, parental responsibility?

SIEWERT: A lot of Aboriginal parents haven’t had a good experience at school themselves. They have been bullied. And they did’t get the jobs and the outcomes they were promised, particularly in remote areas. They are not involved in the decision making about their kids’ education. There are a myriad issues around alcohol and drug abuse. I disagree with the way the government addresses these issues. The kowtow in the NT to the hotel industry. They chop and change programs. I’m not pretending it’s easy but the current approach, doing more of the same, is not going to work.