We spend more on debt than under Labor 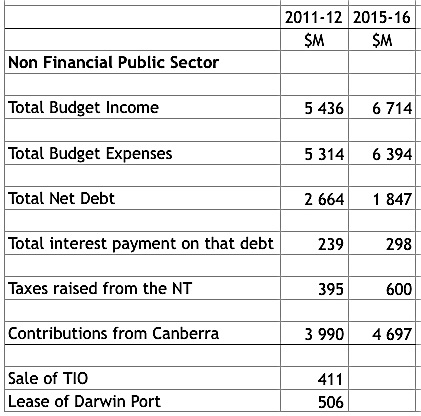 By ERWIN CHLANDA
Comparing the Budgets of Labor’s last full year in power, with the CLP’s most recent (and possibly last), throws a curious light on the thundering by the conservatives about the ALP’s high spending, black holes and so on, four years ago.
While Labor’s total net debt in  was significantly higher ($2.7b in 2011/12 compared to $1.8b in 2015/16), the interest payments by the current government were actually greater – $279m (adjusted for inflation) against $298m for the past financial year. That’s $19m more.

“The increase in the interest payments is to do with the treatment of the PPP (Private Public Partnerships) payments for the prison,” explains Under Treasurer Jodie Ryan, referring to the new Darwin Correctional Centre.

Adjusted for inflation (rounded to 3% a year), the ALP had a total Budget income of $6.1b and the Country Liberals, $6.7b.

Total Budget expenses were $6b versus $6.3b – so the Giles Government was actually the greater spendthrift. The 2011/12 figures in the table (above) are not adjusted for inflation.

It is understood that the change between the two debts is due to a very extensive range of factors, including surpluses and deficits achieved in the years between 2011-12 and 2015-16.

Chief Minister Adam Giles says the increased tax revenue from the NT is largely due to more stamp duty collected on a larger number of homes sold, and more payroll tax collected because of higher employment numbers. Both increases resulted from turnover, not an increase in rates. 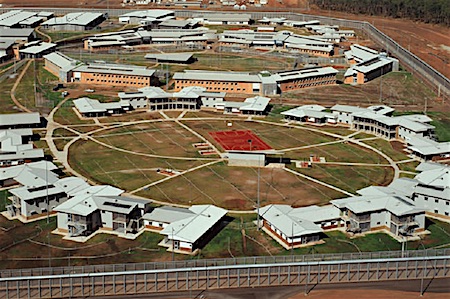 The Henderson Government is about to embark on a period of sustained spending which will hugely increase our debt burden and be a legacy all Territorians will have to pay, we quoted Shadow Treasurer, John Elferink, as saying in January 2012.

Chief Minister Terry Mills “says so far his Renewal Management Board has revealed the new prison (at left) will cost between $600m and $700m by the time it is built in two years. That is well above its original $495 million price tag,” reported the ABC in October 2012, as local historian Alex Nelson reminds us.

Despite using $375m from the sale of two key Territory assets, TIO and the Darwin Port, to reduce the debt, it turned out to be nearly double of what Mr Mills, at the beginning of the current government’s term, feared what it may blow out to.
The Country Liberals have provided costings of election commitments to Treasury showing they will achieve a positive fiscal balance of $35.78m over three financial years from 2017-18.