Henley on Todd: Big kids, small kids, a ball for all 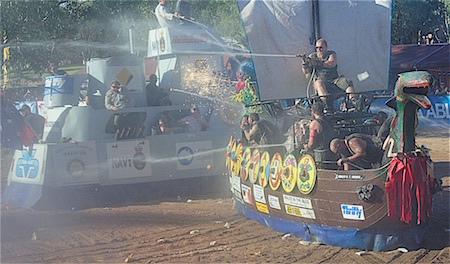 It was hard to tell who had more fun at the dry river “regatta” – the little kids or the big ones: the ones racing their rubber duckies, the others playing pirates, sailors and Vikings as their battle boats churned through the sand (see video).

It seems the kids carried Henley on Todd this year, with a four or five-year-old earning thunderous applause being a distant last – but by Golly was he trying! It was home-made family fun at its best.

The town’s three Rotary Clubs staged the 55th annual fixture, with help from a lot of fellow volunteer friends, to raise money for charity.

Last year’s event, which had much the same crowd as this year, about 4200 spectators, raised $24,000 that was donated to the Fred Hollows Foundation.

The concert in the river the night before had only a small crowd, but Commodore Bill Palmer says the organisers were being encouraged to have another one next year, as new events take some time to catch on, and those who came loved the venue. 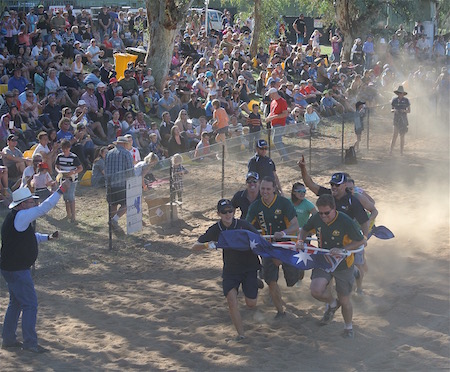 The Aussies won the Australia Cup in a boat that would need to be described as minimalist. Mayor, Henley commentator and inveterate Tweeter Damien Ryan (white hat) is taking a snap. 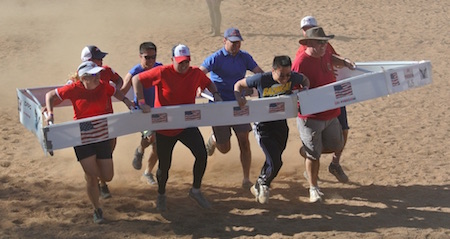 The Yanks came a close second. It may have helped to point the bow in the direction of travel? 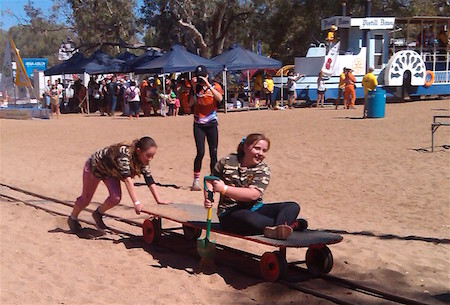 Kids on a surfboard on rails while the the Navy (Rotary Club of Mbantua) was declared as the winner of the sea battle. Vikings (Alice Springs) came second and Pirates (Stuart) were last. No correspondence will be entered into.
[youtube]https://youtu.be/sdEHhP7YyMM[/youtube]