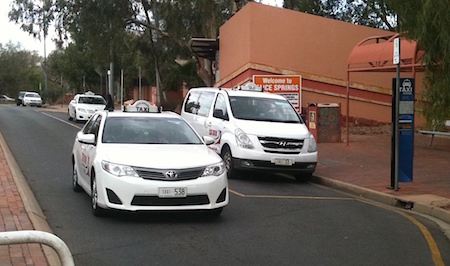 The owner of Alice Springs Taxis, Samih Habib, has called the Uber service a “death trap” while the industry body is firing a broadside at Labor Leader Micheal Gunner for proposing the introduction of the pay-for-ride service to the NT.

But an Uber spokesman refutes the allegations, saying that “more than one million Aussies have chosen ridesharing as a safe, affordable and reliable way to get from A to B, while more than 30,000 driver-partners nationally are earning flexible income sharing rides in their own vehicles.”

Mr Habib (pictured) says Uber drivers do not undergo police checks, but the Uber website states: “All drivers must be at least 21 years of age and are required to undergo criminal background and driver history checks provided by the Australian Federal Police and relevant state transport departments.”

Mr Habib claims third party insurance may not cover drivers, their passengers nor other road users. Passengers or others injured would receive no compensation.

This is also disputed by Uber. The website says: “Riders are automatically covered by Australian state government legislated compulsory third party (CTP) injury insurance, as well as each partner’s own car insurance.”

This means each driver is required to take out CTP insurance which is appropriate for the purpose for which the car is being used.

“On top of that,” says the website, “every Australian uberX trip is covered by vehicle liability insurance issued by the CGU insurance company, which provides at least $20m for third party bodily injury and property damage.”

The spokesman says that part of the insurance cover is obtained by Uber, not the driver.

Mr Habib says he has been assured by the CLP that if returned to government, Uber would not be permitted to operate in the NT.

He says Uber manages its credit card transactions in the Bahamas or some other off-shore tax haven and bypasses paying tax in Australia: “For the Labor Party and Mike Gunner to put the benefit of a foreign company before Australia’s interests is a betrayal.”

Uber did not respond to these allegations when they were put to it.

Meanwhile the taxi industry today “called out” Territory Labor “for its anti-Australian and anti-small business plan to bring Uber to the Territory”.

Australian Taxi Industry Association CEO, Blair Davies says Labor should not be putting “profits for Uber, a huge foreign multinational, ahead of the interests of small business people in the Territory running taxis.

“Michael Gunner needs to come clean about the harm his so-called five point plan will do to ordinary taxi drivers and operators across the Territory.”

Mr Davies said that the NT Taxi Council had asked to meet with Mr Gunner before this weekend’s election but their requests had been declined.

“Taxi drivers pay licence fees and GST that comes back to fund the Territory.  You also don’t find taxis charging outrageous fares during times of natural disaster, such as cyclones.